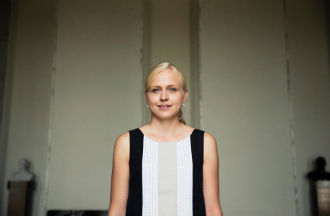 When Jyrki Katainen became a Commissioner in July, 32 year old Elina Lepomäki took his seat in the Parliament. Before that, Lepomäki was Research Director for Libera, a liberal think tank. The new MP promotes a strict, liberal economic policy. Opening municipal services to competition, and allowing income differences and the limit for retirement to grow are within her policy prescriptions. Lepomäki, however, does not see herself as a champion for liberal views.

“Discussions in Finland are easiest undermined by putting people and ideas in a certain mould. I, however, do not see that myself in any idological box.”

In the short-term MP Lepomäki wants to reform the discussion around liberalism.

“I don’t feel that I’m a dogmatic proclaimer for a certain ideology. I haven’t, for example, read any of the classics of liberalism. But the discussion needs to be reformed.”

“Everyone should be allowed to live their lives the way they want, as long as they don’t offend that of others,” Lepomäki says.

The most important issues that Lepomäki intends to highlight this autumn in the Parliament are a transfer payment regime and the reduction of earnings-based unemployment allowances. Currently, earnings-based allowances can be obtained for up to 500 days.

Lepomäki would like to see a transfer payment regime where the primary authority lies with the person themselves.

“While in Libera, I developed an idea for a foundation account. It would reform the social security so that everyone would be entitled to a basic social security, in other words basic income, but anyone can also make their own additional savings that surpass the basic social security. That way, both inefficiency and unnecessary incentive traps are avoided.”

The biggest problem in Finland at the moment, according to Lepomäki, is that the ability to reform is missing. All the structural reforms that have taken place in Sweden are still waiting to be done in Finland.

“The labour market and retirement reforms have been done in Sweden and the role of the public sector has been re-thought. All this is still ahead for us.”

Lepomäki partly associates the sluggishness of reform to the Social Democratic Party.

“The social democrats are the conservatives of the modern day, as well as prisoners of their own past. If the society really wants to be updated, decommissioning corporatism is necessary.”

According to Lepomäki, preservation of the current structure is not “as sacred for anyone else as for the social democrats”. The reason for that is the marriage between the labour market regimes and retirement corporations .

Lepomäki admits that she has been a pessimist for several years – but does not believe that recovering from the enduring economic downturn will be easy this time either.

“In the next two years, the economy of Finland will turn very bad. But on the other hand, I’m optimistic in a long-term scale.”

Lepomäki’s wish for the Parliament’s autumn is simple- for each party to forget about the upcoming election for a while.

“It’s important to think what really needs to be done in this country in the next five years. I am positive, for example, that in 20 years’ time we’ll be wondering how it’s possible that Finnish labour has been so heavily taxed.”