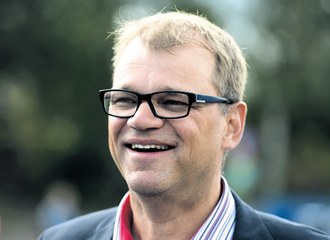 The Centre has overtaken the National Coalition as the largest political party in Finland, according to polls commissioned by YLE and Iltalehti.

The polls also indicate that the Finns Party is currently the third largest party in the country, the opposition party receiving the backing of 17.1 and 16.0 per cent of respondents in the polls by YLE and Iltalehti respectively.

The poll commissioned by YLE also shows that support for the Social Democratic Party has jumped by two percentage points from July to 15.8 per cent. The national broadcaster estimates that the recovery is an indication of female supporters re-affirming their loyalty to the Social Democrats after coming to terms with the ousting of Jutta Urpilainen from the helm of the party.

Iltalehti, in turn, also reports that Juha Sipilä, the chairperson of the Centre, has reduced the advantage of Prime Minister Alexander Stubb (NCP) in the race to become the next Prime Minister of Finland. The poll commissioned by the tabloid daily finds that 32 per cent of Finns back Stubb and 31 Sipilä to take over the reins of the next government.

In June, 35 per cent of Finns surveyed by Iltalehti expressed their support for Stubb and 26 per cent for Sipilä.

Timo Laaninen, the party secretary of the Centre, estimates in an interview with Iltalehti that the approval rating of the party may reflect the "rather quarrelsome" run-up to the Government's recent budget session. "There was hardly a consistent or convincing idea on economic issues about," he said.

The poll commissioned by YLE was carried out by Taloustutkimus and responded to by a total of 1,867 Finns. The margin of error for the largest parties was +/-1.4 percentage points.

The poll commissioned by Iltalehti, in turn, was carried out by Tietoykkönen and responded to by 822 Finns. The margin of error was +/-3.0 percentage points.