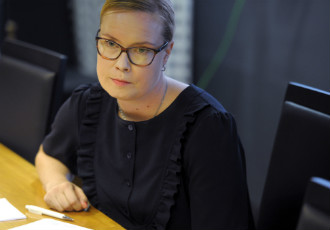 Laura Räty (NCP), the Minister of Social Affairs and Health, has defended her tax avoidance tactics by arguing that it is easier for physicians to organise their workload with a specific corporate arrangement.

Prior to her appointment as the head of the Department of Social Services and Health Care of Helsinki, Räty worked as an on-duty physician at MedOne (currently Attendo), a private practitioner at Mehiläinen and a house physician at the Hospital District of Helsinki and Uusimaa.

YLE on Monday reported that Räty, as a shareholder in DocOne, declared some of her earnings from Mehiläinen as fringe benefits and dividends.

The arrangement is perfectly legal and common among physicians working for a number of health care service providers. “It is a good way for doctors to combine employers and work at several places. It's a good [arrangement], but I have given it up because of its problems,” Räty said in a press conference on Monday.

Räty also revealed that the arrangement allowed her to set up her work schedule around the needs of her young children. “The ease of arranging and combining work was a crucial factor.”

“I had a company through which the arrangement was possible, and I have declared that,” she highlighted.

Räty closed her private practice, stopped working as on-duty physician and surrendered her holdings in Attendo after she was elected deputy mayor of Helsinki to guarantee her competence for the position.

She stated on Monday that she now believes such tax avoidance to be morally unacceptable. “It's not right from a societal viewpoint. I don't think I've done anything wrong, but I wouldn't set up such a company today.”

Instead, Räty pointed out that income taxation should function as an incentive not to declare wages as tax-exempt dividends.

The controversy over her tax avoidance tactics was the second Räty has faced in the past couple of days. Late last week, she estimated that only few Finns earn less than 2,100 or 2,600 euros per month, prompting criticism especially from her political rivals.

“I chose my words poorly, and I continue to apologise for that deeply,” she told members of the media on Monday. “I know that there are hundreds of thousands of families who earn less than 2,100 euros.”