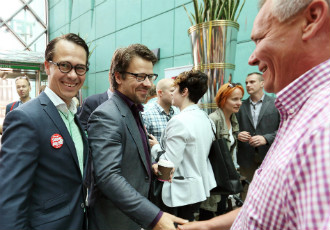 The next parliamentary elections will revolve around economic questions, predict the four party chairpersons who participated in a panel discussion organised as part of the annual Suomi Areena event in Pori on Tuesday.

“The main topic will be economic growth and employment,” stated Juha Sipilä, the chairperson of the Centre.

“Economic growth and employment, without a doubt, and thereby curbing debt growth in the future,” said Antti Rinne, the chairperson of the Social Democrats.

“Entrepreneurship and employment, they will spur new growth in Finland,” said Carl Haglund, the chairperson of the Swedish People's Party.

Ville Niinistö, the chairperson of the Greens, was the only one of the quartet to break the mould. “The best schools in the world will be our first point in the elections. Finland has cut back on education enough,” he stated.

A survey published on Tuesday by the Foundation for Municipal Development indicates that voters widely agree with the chairpersons, identifying economic growth and reversing the debt trend as important goals for the Government.

First and foremost, however, the next Government is expected to guarantee the quality and availability of social welfare and health care services, with 65 per cent of respondents demanding a greater emphasis on the country's care system.

The discussion between the chairpersons also confirmed that the recent settlement on the reform of social welfare and health care system will continue to create friction within the Government, with Haglund reiterating his doubts about the reform. “I'd like to be wrong, but I'm afraid I'm right,” he said, branding the settlement as bureaucratic and distant from the viewpoint of the public.