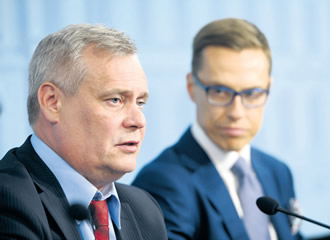 The Legal Affairs Committee of the Finnish Parliament heard representatives of several religious communities before voting 10-6 against a citizens’ initiative for equal marriage rights, points out Veli-Pekka Viljanen, a professor of constitutional law at the University of Turku.

“It’s clear that opening up the Marriage Act also to same-sex couples would be better for equality,” Viljanen continues.

Viljanen was one of two experts in constitutional law heard by the Legal Affairs Committee.

Stefan Wallin (SFP), the deputy chairperson of the Legal Affairs Committee, admits that a number of the over 60 experts nominated by members of the committee were “beside the point”.

“Every member of the committee who represents a certain position is allowed to summon people who perhaps support this position. Everyone of us surely have people like this. Let a hundred flowers bloom,” Wallin explains.

The citizens’ initiative, he reminds, is such a new mechanism that procedural standards have yet to be established. “All members had their way. It was ultimately a long list, but the issue has a number of dimensions: marriage and adoption issues, and the position of trans people,” lists Wallin.

The initiative will be presented to the Parliament for consideration, regardless of its fate at the Legal Affairs Committee.

Olli Mäenpää, a professor of administrative law at the University of Helsinki, believes the issue of equal marriage rights to be of considerable significance. “The question at hand is whether or not marriage rights are a question of equality,” he says.

“A different denomination alone can stigmatise by referring to sexual orientation, even if the rights were consistent,” Viljanen highlights.

From a constitutional viewpoint, he adds, the argument that the extension of adoption rights to same-sex couples would amount to an obstacle to international adoptions is unsustainable because it implies that criteria in other, often undemocratic countries dictate lawmaking in Finland.