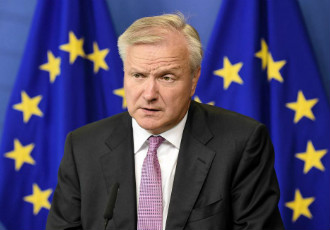 Olli Rehn, a former European Commissioner for Economic and Monetary Affairs, was on Tuesday elected as one of 14 vice-presidents of the European Parliament, becoming the first Finn ever to land the job.

Rehn was elected in the third round of voting.

“I'm grateful for the confidence shown by my colleagues and will do my utmost to develop democracy in Europe,” Rehn commented after his appointment.

Vice-presidents can, if necessary, substitute for the president in performing his duties, such as chairing plenary sessions. In addition, vice-presidents are responsible for a number of administrative, staff and organisational matters.

Rehn on Tuesday insisted that the fact that he was not elected until the third and final round of voting is insignificant. “The duties will be distributed within the Bureau on grounds other than the vote,” he said.

The Bureau of the European Parliament, Rehn added, has several “very interesting and important duties”.

“I believe it's essential that here you can also participate on behalf of the parliament in the European debate on the direction of the union and influence.”

In addition, Rehn believes he will benefit from his experience as a European Commissioner. “I have watched the work of the bureau closely for ten years and can distinguish between an assertive and less assertive president.”

“For ten years, I have also been grilled first about integration matters and in recent years about matters concerning the eurozone debt crisis. I expect to be able to grill members of the commission as an MEP. As a vice-president, I'll ensure that discussions proceed in a businesslike and fair manner on both sides,” Rehn said.