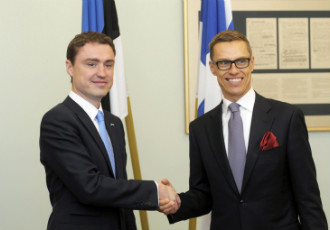 Taavi Rõivas, the Prime Minister of Estonia, is ready to toughen sanctions against Russia unless the country takes action to de-escalate tensions in eastern Ukraine by Monday evening, as demanded by the European Council on Friday.

“Then we have no choice but to apply further sanctions,” Rõivas said while meeting his Finnish counterpart, Alexander Stubb (NCP), in Tallinn on Monday.

Rõivas viewed that further sanctions should be enforced regardless of their possible economic impact on Finland and Estonia, both of which have close trade ties with Russia. “There's no price for independence,” he underlined to Helsingin Sanomat.

Stubb was more moderate in his comments, suggesting that the proclamation by the European Council was simply an attempt to apply pressure on Russia. The newly-appointed Prime Minister estimated that the European Union is more likely to extend its second-phase sanctions than to resort to tougher, third-phase sanctions.

Stubb visited Estonia on Monday in what was his first official visit abroad as the Prime Minister of Finland. The visit, he said in a press conference in Tallinn, marks the first time a Finnish head of state has visited Estonia before Sweden.

“But just so there's no panic in Sweden, we'll go there on Friday,” he added.

Estonia is also ahead of Finland in its integration to the West, Stubb added.