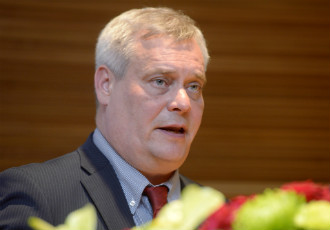 Antti Rinne, the chairperson of the Social Democratic Party (SDP), has expressed his advocacy of equal marriage rights in a statement published on the web-page of the SDP.

Earlier this week, the Legal Affairs Committee of the Parliament decided to recommend that the Parliament reject a citizens' initiative for equal marriage rights, despite the fact that supporters of the initiative outnumber its opponents in the committee.

Two members of the committee, Mikael Jungner (SDP) and Suna Kymäläinen (SDP), were absent from the vote. “Kymäläinen was sick and Jungner late. Both support the initiative,” Rinne explains.

“When the Parliament votes on questions related to equality and human rights, the Social Democrats will be present,” he assures.

The citizens' initiative will be submitted to the Parliament for consideration this autumn.

“I hope that Social Democrats will speak up for equality before the vote and vote to realise it. All human rights, which we in Finland consider self-evident, have required long and persistent struggles. These struggles continue, and the place of the Social Democrats is on the front lines,” Rinne phrases in his statement.

The initiative, Rinne views, is a question of human rights and equality, not one of conscience or sentiment, or liberalism or conservatism. “Equality is a fundamental human rights issue. Its realisation should be self-evident in a civilised state,” the chairperson argues.

“Human rights belong to every individual, and the realisation of the rights of no one should depend on the ethics or conscience of others,” Rinne writes.