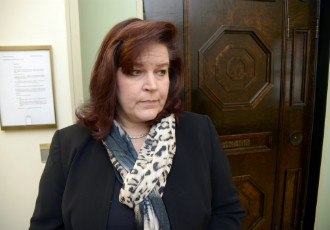 The Legal Affairs Committee of the Finnish Parliament has voted 10-6 against a citizens' initiative for the introduction of equal marriage rights and will consequently advise the Parliament to reject the initiative in its plenary session this autumn.

The parliamentary debate is nevertheless expected to be even.

The backers of the initiative admitted to being disappointed with the outcome of the vote. “It's a question of human rights, equality and equality before the law,” said Salonen. “We're the only Nordic country without equal marriage laws,” lamented Pekonen.

One of the members to vote against the initiative, Mika Niikko of the Finns Party, described the outcome as “a blessing”.

“It's a matter between a man and woman, marriage that is,” said Kari Tolvanen (NCP), another member to vote against the initiative. Tolvanen also justified his decision by claiming that the initiative does not fulfil the criteria for high-quality lawmaking.

Even if the Parliament in its plenary session decides to back the initiative, the Government is unlikely to draw up a bill for equal marriage rights before the elections due to its promise to the Christian Democrats not to do so.

The Legal Affairs Committee also rejected a proposal to extend marriage rights to gay couples in 2013, when the vote tipped 9-8 against the proposal.

As a result, Finland remains the only Nordic country yet to permit same-sex marriage. Sweden, for example, introduced equal marriage rights already in 2009.

In the United Kingdom, the first same-sex couples were married this March following the approval of the Westminster Parliament last year. Elsewhere, equal marriage rights have been introduced in, for example, the Netherlands, Belgium, Portugal, Spain, France, Argentina, New Zealand, Uruguay, South Africa, Canada and in some American states.