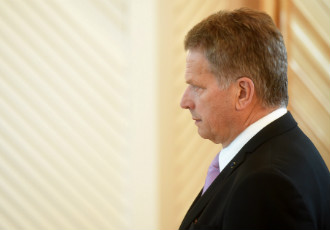 After appointing the Cabinet of Prime Minister Alexander Stubb (NCP) at the Government Palace on Tuesday, President Sauli Niinistö urged the new Government to take action.

“The Government has inherited a lot of work from its predecessor. The much talked-about, often decided reforms of structures must finally be resolved and implemented for good. The era ahead of us is a challenging one,” Niinistö emphasised at his official residence Mäntyniemi.

The President also offered words of advice to the newly-appointed Government. “We tend to pay a lot of attention to how our actions are perceived. We must focus on where our actions take us. That's how difficult a time we're living in.”

The Government, Niinistö emphasised, now has the opportunity to demonstrate its capabilities. “Show us!” he urged.

Standing up straight, the newly-appointed Prime Minister assured in a calm voice that his Government is fully committed to the austerity measures and structural reforms hammered out earlier. “There isn't too big or small a structural measure that this Government shouldn't resort to,” Stubb stated.

Earlier on Tuesday, Niinistö relieved the Cabinet of Prime Minister Jyrki Katainen (NCP) of their duties and appointed their successors as per the recommendation of Stubb. On Monday, the Finnish Parliament voted 98-76 in favour of approving the appointment of Stubb as the Prime Minister of Finland.