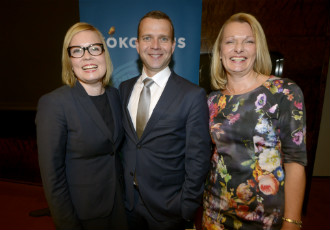 The National Coalition (NCP) has reshuffled its ministerial line-up, reassigning the portfolios of everyone but Jan Vapaavuori, the Minister of Economic Affairs.

Laura Räty, the deputy Mayor of Helsinki, will succeed Paula Risikko as the Minister of Social Affairs and Health. Risikko, in turn, will assume the office of the Minister of Transport and Local Government relinquished by Henna Virkkunen due to her responsibilities in the European Parliament.

Prime Minister-elect Alexander Stubb will hand over the portfolio of the Minister for European Affairs and Foreign Trade to Lenita Toivakka, while Petteri Orpo will succeed Jari Koskinen as the Minister of Agriculture and Forestry.

The NCP unveiled its new ministerial line-up on Monday, following a report by Iltalehti.

The extensive reshuffle may benefit the party in the next parliamentary elections by enabling the new ministers to gain greater visibility and their predecessor to campaign on their ministerial experience.

Stubb on Monday revealed that he had contemplated the appointments ever since his election as the NCP chairperson in Lahti in mid-June. “I hope that geographical factors, expertise and gender distribution have all been taken into consideration,” he said.

In addition, the Prime Minister-elect suggested that the expertise of Vapaavuori in economic affairs is likely to be unrivalled in Finland.

Stubb also revealed that Risikko had approached him immediately after the party conference to say that she believed the time was right for a new challenge after seven years as the Minister of Social Affairs and Health. “It was entirely Paula's decision,” he emphasised.

Räty, in turn, is needed to hammer out the reform of social welfare and health care services. “She's a doctor, a consummate professional who oversees 22,000 people somehow involved in the reform,” Stubb explained.