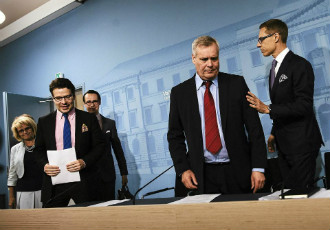 Alexander Stubb (NCP), the Prime Minister-elect, appeared before the press at 6 pm on Thursday to announce that the five ruling parties have reached an agreement on a new government programme.

The scope of the debated growth package, which includes tax cuts worth 410 million euros, will be 1.1 billion euros. Elsewhere, the income tax rates for the three lowest income brackets will be adjusted for inflation next year.

The chairpersons also agreed to alleviate the situation of businesses by restoring the tax deductibility of representational costs and by abolishing the windfall tax imposed on energy utilities.

The most notable cost items, in turn, stem from the Helsinki City Rail Loop and Western Metro Extension, which alongside measures to promote residential construction amount to 340 million euros.

The five chairpersons do not comment on nuclear power in the government programme.

Stubb in the press conference revealed that Antti Rinne, the chairperson of the Social Democrats, came up with the name of the programme: “Finland to rise again: growth and employment”. Stubb, however, came up with the latter part.

In addition, Stubb insisted that the Government can adhere to its budgetary framework and reverse the debt-to-GDP ratio of Finland by 2018. Martti Hetemäki, a permanent state secretary at the Ministry of Finance, estimated that the substantial growth package will boost the output potential of the Finnish economy.

“The investments are ones that would have to be made at some stage regardless,” Hetemäki pointed out.

“The package will certainly sound big to many – as it is,” Stubb admitted.