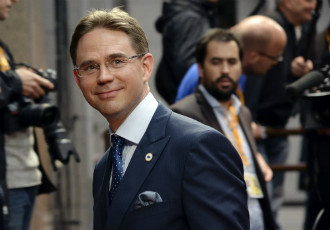 Prime Minister Jyrki Katainen (NCP) has said that he is prepared to re-locate to Brussels in early July, if he is appointed to succeed Olli Rehn (Centre) as the European Commissioner for Economic and Monetary Affairs after Rehn assumes his new duties in the European Parliament.

“I'm ready to start on 1 July, if possible,” Katainen told Finnish reporters in Brussels on Tuesday.

The European Parliament will convene for its first plenary session on 1 July, but European Commissioners will hold their posts at least until early November.

The Finnish Government, Katainen said, will consider the appointment in a regular session as soon as it is notified of the resignation of Rehn. The appointment will also require the approval of the European Parliament, but the vetting procedure is not expected to be as thorough as it is for permanent commissioners.

Katainen, who will renounce the office of the Prime Minister in June, has expressed his interest in taking up the position of Finland in the European Commission or another high-powered position within the European Union.

“My goal and hope is that I can work as a member of the commission, if my experience and expertise are deemed sufficient for the position,” Katainen said.

Finland's representative in the European Commission will be nominated by the Prime Minister.

Katainen is widely regarded as a possible candidate for a number of high-powered EU positions, such as the President of the European Council, the High Representative of the Union for Foreign Affairs, and the Chairman of the Eurogroup.

The candidate on Tuesday evening declined to speculate on his chances of landing any of the positions. “I have absolutely no idea how people all over Europe think at the moment,” he insisted.

European heads of state gathered over dinner in the Belgian capital to discuss the ramifications of the European elections, the focus of the next five-year term and the process of nominating the next President of the European Commission.