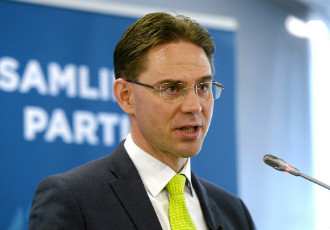 If the Social Democratic Party moved a couple of notches to the left following the appointment of Antti Rinne as its chairperson, Jyrki Katainen, the retiring chairperson of the National Coalition (NCP), nudged his party moderately to the right in his address in Tikkurila, Vantaa, on Saturday.

Although his words appeared to have been aimed directly at Rinne, Katainen insisted that his intention was not to cast blame on a particular party or policy-maker.

“Time will tell what the Social Democrats' line will be. I spoke on the basis of what I have perceived to be a development trend over the past 12 to 18 months.”

Katainen in his addressed portrayed the NCP as a reformer and other political parties as prisoners of the past, criticising the deep-rooted Finnish tendency to have no confidence in the capacity of people to make their own decisions.

“In the Finnish political spectrum, answers are increasingly sought in the past. You glorify the 1980s, the past decades, and feel that the current transitional stage can be resolved by the state administration re-building Finland.”

Such state-centric decision-making, Katainen argued, promotes the perception of policy-makers as “omnipotent”.

“The prevalent thought is that increasing freedom of choice, confidence in the virtues of diligence and education will always yield something bad and unjust,” said Katainen. “Such thinking is detrimental for our ability to reform.”

As a result, the NCP must become a party that respects and safeguards individual freedoms, particularly in economic policy-making. “Do we rather believe in statist selection or in the ability of people to make their own choices?” asked Katainen.

In addition, the development will widen the divide between the supporters of various political movements, he warned.

On the other hand, Katainen also cautioned the NCP against excessive radicalisation. “There will always be a need for national unanimity in Finland.”

“The question is whether Finland remains able to pursue the common good as our tendencies take us in a more radical direction.”

The polarisation of the social and political landscape in Finland will also require new leadership capabilities from the NCP, Katainen viewed. “We cannot set out on a path where we radicalise or marginalise ourselves in order to maximise our support, because there will always be issues in Finland that must be decided together.”

Later, the retiring chairperson also affirmed that his speech at the Vantaa City Hall was not his political bequest. “I spoke about the values and future of Finland. Today, we turn to the state for help and support for every problem. Us who believe in people and education are in the minority,” he said.