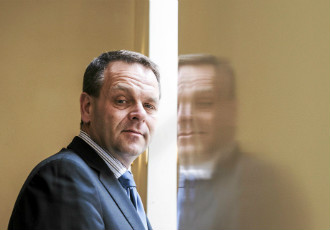 Vapaavuori revealed that he seeks to succeed the Jyrki Katainen at the helm of the NCP in a video published on his web-page on Monday.

In early April, Katainen announced that he will not seek re-election as chairperson and will relinquish the office of the Prime Minister to his successor, to be appointed in NCP's party conference in June.

In the video, the 49-year-old Vapaavuori reminds that he has been an active member of the NCP his entire adult life, highlighting his strong emotional bond with the party and its values, as well as his desire to continue to participate in its activities.

The candidate refused on Monday to comment further on the matter but is scheduled to hold a press conference on Tuesday morning.

A poll conducted recently by MTV finds that Vapaavuori is the favourite of NCP representatives to take over the reins of the party, with roughly one-quarter of the members of NCP district organisations voicing their support for him.

In addition, some of the NCP members surveyed voiced their support for party secretary Taru Tujunen and Jyri Häkämies, the director general at the Confederation of Finnish Industries.

Vapaavuori has served in the Finnish Parliament as a representative of the NCP since 2003 and as the Minister of Economic Affairs since November 2012. In addition, he served as the Minister of Housing in the Governments of Matti Vanhanen (Centre) and Mari Kiviniemi (Centre), as well as a minister at the Ministry for Foreign Affairs.