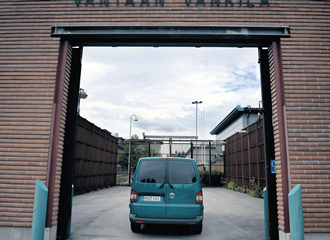 The basic rights of a prisoner prohibit handcuffing during transport. Amendment to the prisoner law, which would enable the chaining of prisoners or prisoners on remand by cable ties or handcuffs during transport, is currently being processed at the Parliament. At the moment, chaining is permitted during transports only if it is suspected that there is a risk of escape or violence.

Kari Tolvanen, an MP with a police background, says that the problem arises when, for example, groups of up to ten prisoners are transported daily from Vantaa's prison and are driven through the crowded city to the district court of Helsinki. Prison authorities have been strongly demanding the right to chain the prisoners in questionable group transports. The hands of prisoners would be tied together, not to structures or to other prisoners.

"It is impossible for the prison guards to foresee how the situation develops during transport. There are often only a couple of guards on the bus and the transportation equipment is not much more than one would have on a regular minibus," says Tolvanen.

"I think that group chaining is perfectly justified in situations where prisoners are transported to areas where there are a lot of outsiders and several stops. Should an unexpected escape situation occur, both guards and civilians may be put in danger."

Tolvanen considers it strange that the prohibition on chaining has been justified on human rights grounds.

"In my opinion, the rights of civilians should be ensured instead. Chaining does not disproportionately offend the human rights of a prisoner who has already lost their freedom, if they are handcuffed for example for half an hour, and are not even seen by outsiders."