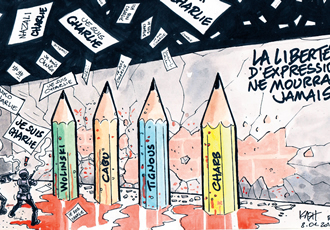 Publishing Muhammad pictures from the French satirical weekly, Charlie Hebdo, is allowed in Finland, says Doctor of Jurisprudence and former state prosecutor Mika Illman for Sunnuntaisuomalainen. According to him, distributing the pictures would not bear hallmarks of hate crimes. In contrast to other EU countries, Finnish law regarding breaking religious peace is in force. According to the law, shaming a religious community publicly can lead to a verdict for blasphemy.

However, for example the Muhammad pictures from Danish newspaper Jyllands-Posten were not seen as bearing hallmarks of a crime. In 2006, Suomen Sisu published caricatures of Prophet Muhammad on their website, but the case never proceeded to court.

He says, however, that although the distribution of such pictures is allowed, the decision of doing so should not be taken lightly.

"The freedom to distribute such pictures must exist, but doing so is playing with fire. Such actions might lead to increasing tensions and violent outbreaks – although they do not justify them."