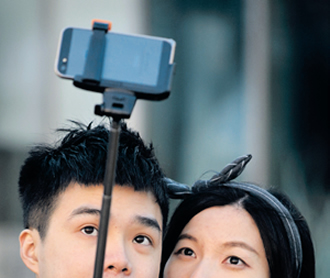 In social media, selfies have become mundane. Recently, an aid available for taking a quality selfie has appeared on the market: a selfie stick.

Selfie sticks are already in wide use in some countries. In South Korea, restrictions have already been placed on selfie sticks, with unregistered vendors being threatened with either a fine or imprisonment. Selfie sticks operating with wireless Bluetooth technology are feared to interfere with other devices.

The selfie stick as an idea is not new. Different kinds of stands for cameras have already been invented. The selfie stick, however, is specifically designed for selfie-taking on mobile phones. The stick, stretching beyond a metre in length, has appeared more visibly in stores in Finland this autumn.

Clas Ohlson's manager in Turku Kaisa Sipponen admits that a couple of months ago, she had not even heard of the device.

"We received selfie sticks in our store one month ago. It's noticeable that both demand and awareness of the selfie stick is on the increase."

Sipponen believes that the selfie stick will be the hit product this Christmas.

At the end of the stick there's a fastener, which a phone or camera can be attached to. A button on the handle triggers the camera. With the help of the stick, the mobile phone can be taken further from the individual and thus enabling, at least in theory, the taking of a better selfie.

The selfie stick has also been noted in Time magazine where it was named as one of the major inventions of 2014.