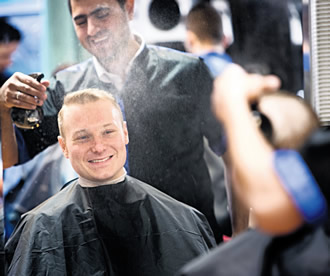 In autumn 1988, a new world opened up to Timo Hämäläinen. The boy, who had started school in the small municipality of Kangasala, moved to Saudi Arabia with his family.

His parents, who worked as doctors, took the family to Tabuk where they found a house behind a high wall with the hustle and bustle of the city and its bazaars right on the other side.

"I realised then the attraction of cities," says the 32-year-old Hämäläinen now.

After the stay in Saudi Arabia, cities followed one after another: Tampere, Helsinki, San Diego, Berlin, New York, Brussels, Tilburg, Manchester and Tallinn. Hämäläinen has immersed himself in the world of cities, gaining two master's degrees on the topic.

"Cities are fascinating because they are so dynamic."

Earlier this year, a quality British newspaper, The Guardian, featured Timo Hämäläinen's blog From Rurban to Urban, hailing it as one of the best city blogs in the world.

The number of visitors to his blog has grown exponentially since then.

Besides via the article in the Guardian, readers find their way to his blog using such search words as Tapiola, Puu-Vallila and "Finland ugly cities".

Hämäläinen focuses on Helsinki and the urban planning in the city but the Tourist Board should not rub its hands with glee as Hämäläinen has a keen eye for flaws.

A typical Finnish cityscape is a shopping centre next to a motorway, the writer argues. Another claim is that urban planning in Helsinki is insipid.

"Helsinki could be much bolder. The city is still being built on the 1960s suburban model."

As proof of this, Hämäläinen offers Ruoholahti and Arabianranta, with their lack of life on the street level.

In contrast, Kallio, where Hämäläinen lives, showcases pleasant and sensible city planning. A new barber's shop run by men with Iraqi background just opened its doors on the street level of the house Hämäläinen lives in and gained him as a customer straightaway.

"There are a lot of people who like to lead a city lifestyle. That means corner shops and courtyards."

Hämäläinen calls himself an urbanist. People who believe in the principles of urbanism want to promote built-up, urban living environment and lifestyles that favour walking and green forms of transport.

With six kindred spirits, he is involved in drawing up a shadow city plan as an alternative to the official plan, which paints a vision of Helsinki with 860,000 residents by 2025. The group raises the stakes.

"When you design densely built areas, you can easily get a million residents without touching the parks and recreational areas."

The favourite city of this globe-trotter is New York, with Berlin close behind.

"Berlin is immensely fascinating. It's got all that history but has transformed itself into a hotspot of youth culture. Something is on all the time."

When in Berlin, he always visits Görlitzer Park in Kreuzberg.

"It's a real city park where you can find people at all hours of the day. Barbecues are lit and the place just oozes local history."

Writing is in Hämäläinen's genes. His grandfather was Pertti Pesonen, professor of political science and the former editor-in-chief of the newspaper Aamulehti.

The reason why Hämäläinen writes his blog in English is connected with his grandfather. While in New York on a work placement, he visited a friend of his grandfather's in a local old people's home.

Why write in Finnish when it excludes such a huge number of people from the discussion, the friend queried.

Hämäläinen can spend days on polishing and perfecting his blog texts, which take him all over the city, where he takes pictures and contemplates what he sees.

Unlike fashion blogging with its perks of free make-up and advertising revenue, city blogging does not bring the writer any material benefits. The compensation comes in the form of comments by other urban enthusiasts, which can spark a lively discussion.

The journalist grandfather may well have passed some of his inquisitiveness to Hämäläinen, who gives urban hiking as one of his hobbies.

"You never know what you find around the corner."