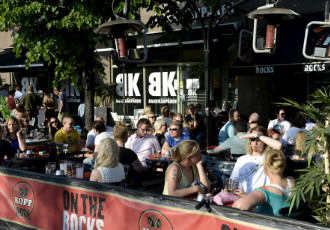 The boycott threat issued by over 130 bars, cafés and restaurants in Helsinki has been lifted, after the proprietors and the Helsinki Public Works Department resolved their dispute over the appearance of outdoor terraces.

The proprietors had threatened not to apply for terrace permits for the years 2014—2021 in protest of what they viewed were excessively strict new terrace instructions.

Altogether, roughly 500 outdoor terraces serve food and beverages in Helsinki during the summer months. If carried out, the boycott would have therefore changed the street scene in the Finnish capital dramatically.

The Finnish Hospitality Association (MaRa) and the Public Works Department concluded last week that the instructions and provisions for renting terraces should be clarified. MaRa approved the revised instructions, published on the web-page of the Public Works Committee, yesterday and will consequently recommend to its members that they abandon the boycott plans.

The clarified provisions will also apply to agreements already in force.

The Public Works Committee will discuss the matter in its first meeting in April.

One of the central bones of contention in the dispute were the instructions for awnings and adverts. “The section has been re-written, because the Alcohol Act governing alcohol advertising will change at the start of 2015. [The regulations on] alcohol advertising will become stricter and the instructions refer to this,” explains director Pekka Henttonen of the Public Works Department.

“In addition, the instructions state that adverts, including adverts on awnings, will require a planning permission for minor construction […] granted by the Building Control Department.”

Similarly, the instructions for terraces located on uneven or windy lots have been clarified and the provision prohibiting the use of sound systems removed altogether. Regardless, the use of terraces should not cause any undue noise to any nearby properties.