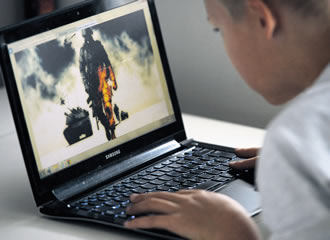 Youngsters who spent more than five hours surfing the net, playing video games and watching television suffer more commonly from depression, anxiety and suicidal thoughts than others, reveals a new study published in the journal World Psychiatry. More than 12,000 adolescents from eleven European countries participated in the study that looked at young people's risk behaviour.

Researchers investigated adolescents' use of alcohol and drugs, weight problems, lack of sleep and exercise and prolonged screen time. The study included young people from Estonia and Sweden but no Finnish adolescents took part in the survey.

Klaus Ranta, Chief Adolescent Psychiatry Physician of the Helsinki University Hospital, says that if a teenager spends prolonged periods of time on the Internet it can be an indicator of problems in social relationships.

Lonely youngsters suffering from social phobias commonly regard the Internet as the only thing that helps them keep their heads above water.

"But often the Internet also increases their isolation from the outside world," says Ranta.

The results showed that youngsters who spent a lot of time in front of the screen of a computer or a video game suffered from anxiety and depression almost as often as the adolescent who received high scores in all the forms of risk behaviour.

Young people with excessive screen time were dubbed the "invisible group" in the study as the full effects of the behaviour are not yet known.

The term atypical depression refers to a form of depression with some features that are different to what is seen in depression usually. The symptoms include weight gain or increased appetite, increased need for sleep, heavy sensation in the legs and fear of becoming abandoned. Being more difficult to recognise, the treatment of atypical depression is often delayed.

According to Ranta, excessive time spent online can worsen depression triggered by setbacks in everyday life. Spending prolonged periods of time on the Internet can disrupt an adolescent's sleeping patterns and interfere with relationships and the control over day-to-day life.

"If a teen only has friends on the Internet and never meets them in real life, it should set alarm bells ringing.

A psychologically vulnerable adolescent can use the internet to create an illusion of a circle of friends."

Ranta says that the unit of youth psychiatry treats a high number of adolescents who lock themselves in their rooms and spend most of their waking hours online.

If the whole family spends a lot of time on the Internet, the child's addiction may go undetected.

"It's important that parents make sure the family does more in their free-time than surf the net," comments Ranta.