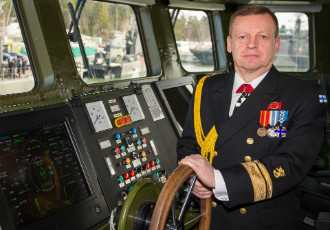 Finland and Sweden are mulling over collaborating in the building of warships, Rear Admiral Kari Takanen, the Commander-in-chief of the Finnish Navy, has revealed. “Yes. Sweden has a similar project in the pipeline in the same time frame. We are exchanging information about possible co-operation,” he says.

The possible co-operation is related to the so-called MTA 2020 project, as part of which the Finnish Navy is set to introduce a new class of warships to replace seven of its current vessels.

Finland has not, however, considered acquiring the Swedish Visby-class corvettes, Takanen says. “No we haven't. They're too expensive.”

The debate over the military co-operation between Finland and Sweden has intensified over the past few years.

The new, larger warships would enable the Finnish Navy to participate in international crisis management operations in open sea.

After the decommissioning of Pohjanmaa, the flagship of the Finnish Navy, the two largest vessels of the country's fleet are the Hämeenmaa-class minelayers Hämeenmaa and Uusimaa. “The Hämeenmaa-class has been serviced and can be deployed all the way to the Mediterranean but not to the Indian Ocean,” Takanen says.

Although the new warships have been on the table for almost five years, the Finnish Navy has been unusually reluctant to comment on the conclusions of the deliberations. Takanen now reveals that the next-generation Finnish warship will be a multi-purpose vessel that is capable of operating both along the Finnish coast and in open sea.

“It's set to replace the three minelayers [Pohjanmaa, Hämeenmaa and Uusimaa], and even the Rauma-class [Rauma, Raahe, Porvoo and Naantali],” he says.

Would a state subsidy granted to a Finnish shipyard promote the cause of the Finnish Navy?

“Yes, by ensuring that such a vessel can be built in Finland. If the funds are found, we are prepared to move forward with the matter,” Takanen states.