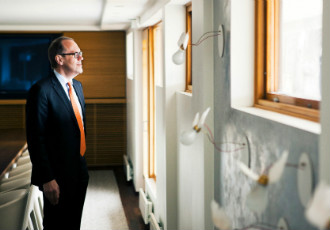 The City of Helsinki is set to acquire the seaside villa of Nokia in Koivusaari, Helsinki, easterly from the Espoo border. The former mobile phone behemoth will receive 2.75 million euros for the villa and the lot, provided that the transaction is approved by the Helsinki Real Estate Committee when it convenes to discuss it on Thursday.

Comprising roughly 550 square metres, the main building was built in 1963 and the adjacent log sauna two decades later. The facilities have been renovated recently and according to the Real Estate Committee are currently “in very good condition”.

By the shore, the stone jetty is “solid and well-lighted”.

Yet, the gorgeous facilities may not be maintained, with Tom Qvisen, a project manager at the Real Estate Committee, revealing that the buildings may be demolished if it enables Helsinki to draw a functioning city plan. The first attempt of Helsinki to designate Koivusaari as a residential area hit the rocks due to lack of funding: the turn-off from Länsiväylä and concrete deck over the highway would have cost over 140 million euros.

For Nokia, Koivusaari has been a location of great significance.

During the years of Nokia's breakneck growth in the 1990s, its management used to convene at the villa every Sunday, revealed Jorma Ollila, a former CEO and board chairman at Nokia, when interviewed by Kuukausiliite in 2012. In addition, a number of significant contracts have been struck at Koivusaari.

While waiting for Helsinki to finalise its zoning plan, Nokia could hold tenure to the Koivusaari Villa until 2020. The villa also features a view to Keilaniemi, the site of another asset Nokia is set to offload – its head office.