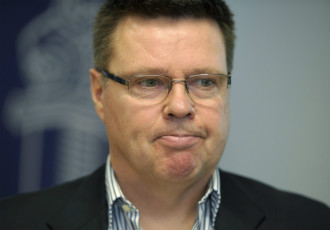 Jari Aarnio, the chief of the Helsinki Police Department's drug squad, is suspected of leaking the identity of a police informant to a third party in 2009. In addition, he is believed to have revealed details of an undercover operation to a third party.

With the period of the statute of limitations for the suspected offence set to expire next month, the prosecution has asked the District Court of Helsinki to extend the period.

Tentatively, the suspended drug squad chief is suspected of breach of official secrecy. “The accusations are so serious that we have asked to remove the statute of limitations,” Jukka Haavisto, the prosecutor in charge of the investigation, said on Thursday

In addition to Aarnio, two of his subordinates are suspected in the case.

Haavisto similarly refused to reveal to whom Aarnio is believed to have leaked the details. “It's a third party that had no business knowing them. I can't comment further on the matter.”

Haavisto was also reluctant to speculate on the motive of the alleged leak and whether it may have put the informant or undercover police officer in danger.

The District Court of Helsinki is scheduled to deliver a verdict in the matter next Wednesday.

Similarly to the prosecution, Riitta Leppiniemi, the defence counsel of Aarnio, insisted that she cannot comment on the matter at this stage.