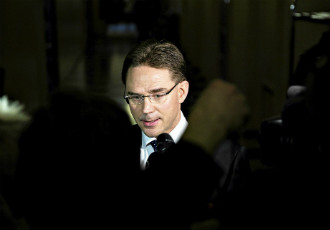 Finland does not advocate imposing broad economic sanctions against Russia in order to alleviate tensions on the Crimean peninsula. Instead, it is prepared to take political and diplomatic action alongside other member states of the European Union in an attempt to appeal to Russia, Prime Minister Jyrki Katainen (NCP) revealed when arriving in Brussels for an emergency EU summit on Thursday.

The measures contemplated in the summit, Katainen estimated, may entail the suspension of the ongoing negotiations on an EU-Russia visa waiver agreement.

“If the situation deteriorates, we must be able to also weigh up other sanctions. Surely, though, no one hopes that we have to go so far,” the premier said.

According to Katainen, Finland is not prepared to impose economic sanctions against Russia as they would inevitably hamstring the Finnish economy by restricting trade with Russia.

Similar statements given by the heads of other member states suggest that the European Union is willing to allow time for the situation to cool.

Katainen emphasised several times that ultimately the growing tensions in Crimea can only be alleviated through negotiations. “The sooner we get all stakeholders to sit down at the same table, the sooner we can resolve the crisis.”

Katainen appeared to suggest that it would be ill advised to agitate Russia, if the objective is to sit down with it to discuss the situation in Ukraine. Germany, he said, is one of several member states that agree with Finland.

The rare breakaway from the cautious comments of most EU leaders came from Lithuanian President Dalia Grybauskaite, who viewed that Russia is currently re-drawing the borders of Europe by force. Sweden's Prime Minister Fredrik Reinfeldt said in similar vein that he is already prepared to also discuss sanctions against individual Russian policy-makers.

Katainen, in turn, tried to assure that a joint position can be reached.

Finland's contribution toward the floated aid package would be an estimated 160 million euros. “Barroso's proposal is fine by us,” stated Katainen.

Although tensions remain high on a number of fronts, Katainen wanted to express his gratitude to the people of Ukraine for not being provoked into violence in Crimea.