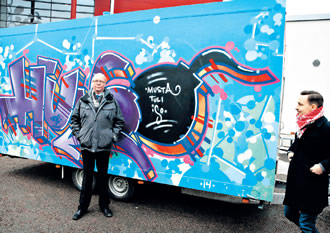 Next summer, Helsinki will boast more places where people can create street art with permission.

Looking hesitant, Tommi Laitio, the director of youth affairs at Helsinki City, studies the skilfully executed graffiti for some time. Then he makes up his mind to the disappointment of the Helsingin Sanomat reporter and photographer.

"I don't want to cover those up. It would make me feel like an old geezer," Laitio defends himself, standing in front of some murals in Arabianranta in Helsinki.

Laitio and Raimo K. Saarinen, head of division at the Public Works Department, are presenting Helsingin Sanomat with the City of Helsinki's plans to introduce three new street art walls in Helsinki next summer, putting the total number of authorised graffiti areas to eleven.

In addition to these graffiti walls, open to everyone, street artists can get creative in the surroundings of the Kiasma art museum and on the walls of an art van doing the rounds in various events held in Helsinki.

"This is a form of youth culture that is obviously retaining its popularity. It's our job to foster it," says Laitio.

From the perspective of the Public Works Department, authorised graffiti walls and other designated street art areas are sensible ways of supporting street art.

"It's important that young people can try this out legally, without the fear of getting their name in some register if caught red-handed," explains Saarinen.

Laitio and Saarinen both say that previous experiences of authorised sites have been promising.

"It's important to us that the amount of illegal graffiti does not go up. There's definitely demand for places to do graffiti so it's essential that the painting is done legally and somewhere that's under supervision," says Saarinen.

The new authorised graffiti walls are sign of Helsinki having softened its zero tolerance attitudes towards street art since the Stop töhryille ("stop tagging") campaign that cost the city millions of euros.

"The campaign was the product of its times, initiated by property owners and politicians back then. It helped clean up the walls but it didn't put a stop to the phenomenon," explains Saarinen.

The same can be said about the authorised graffiti walls which have not spelled the end of illegal tagging either. According to Saarinen's estimate, Helsinki spends to the tune of 200,000 euros every year on cleaning unwanted graffiti and tags.

"There is of course the hardcore lot who are not influenced by legal painting opportunities. There are usually other motivations behind this, besides street culture," explains Laitio, adding that authorised painting sites have not in any way increased illegal graffiti.

"The youth department has received only good feedback on these sites," Laitio mentions.

The graffiti walls open to the public have gained popularity because the graffiti artists who are big names in the subculture use them for their murals.

"When you want to reach the masses, the main thing is that the big names become involved. Otherwise it won't work," says Antti Salminen, the youth worker responsible for the hands-on running of the sites.

Salminen, who is no stranger to doing graffiti art, explains why Laitio and Saarinen shied away from painting on the murals in Arabianranta.

"The principle is that the work that goes on top must be better," he laughs.

"Words might be exchanged if you paint on top of someone else's painting but nobody gets really worked up about it."