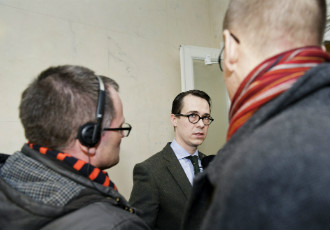 The message that resonated through the statements of Finnish lawmakers on Sunday was that Finland does not approve of the actions of Russia on the Crimean peninsula. “Threatening with violence or using it violates international law,” President Sauli Niinistö stated on Sunday, after considering the ongoing crisis with the Cabinet Committee on Foreign and Security Policy.

Tuomioja himself is on Tuesday scheduled to sit down with the Russian ambassador in Finland.

The most concrete response yet to the unrest in Ukraine has been the decision by Carl Haglund (SFP), the Minister of Defence, to postpone his meeting with his Russian counterpart Sergey Shoygu until further notice.

“My visit could have easily been interpreted as a statement of support for the actions of Russia,” Haglund explained. “We don't want this. On the contrary, we cannot approve of the manner in which Russia has acted in Crimea.”

Naturally, a bilateral meeting with Shoygu would have represented an opportunity to discuss the situation on the peninsula, the minister conceded, stressing however that the Finnish foreign policy is communicated abroad by President Niinistö.

On Sunday, Niinistö viewed that the dialogue between Russia and the European Union will be the key to resolving the ongoing crisis. Prime Minister Jyrki Katainen (NCP) similarly viewed on Saturday that Finland must first and foremost support the effort of the EU to help alleviate the tensions in Ukraine.