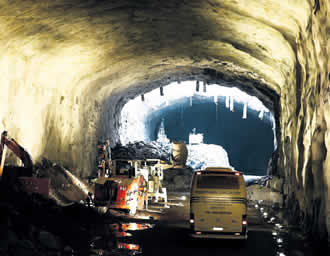 Construction work on the western metro extension is facing yet again new delays and it now seems likely that the earliest passengers can take the metro to Espoo is autumn 2016.

"We should be able to meet that schedule," says Olavi Louko, the chair of board of directors for Länsimetro Oy, the company responsible for the work.

All stages of the work have dragged on past the timetable and the new date cannot be considered certain as there have also been later predictions for the completion date. Before the latest announcement, the new metro line was set to be in operation at the beginning of 2016.

"Different deadlines have been given so I don't want to comment on them yet," states Matti Lahdenranta, managing director of Helsinki City Transport (HKL) and the deputy chair of Länsimetro Oy's board.

The delays were one of the topics of the talks held last week between Länsimetro Oy, HKL and Siemens, which is responsible for the automation work on the new route. At the meeting, Siemens gave its prediction on the completion of the automated system, with delays in this work having a knock-on effect also on the rest of the project.

According to Lahdenranta, the main problems concern the functioning of the doors leading to platforms, the conversion of old metro trains into automatic trains and the delivery of new trains, but the construction work on the tunnels and stations in Espoo has not progressed to timetable either.

The HKL board may discuss the delays in its meeting on Thursday.