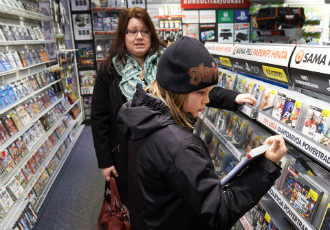 Finnish parents are widely either unaware of or neglect the age limits of video games when buying games for their children. Although roughly half of parents said in a recent survey that they abide by the limits and two in five that their children abide by them, only one in three viewed that the limits are absolute and are to be adhered to according to the law.

Commissioned by the National Audiovisual Institute (KAVI), 1,001 parents and guardians were interviewed for the survey.

“Parents have no personal experience from video games. Many still regard digital games as a part of the children's world, similarly to board games,” estimates Tommi Tossavainen, a planning officer at KAVI.

On Sunday, 11-year-old Kaapo Collan browsed the shelves of the video game shop Gamestop with his mother, Piia Collan, in the Kamppi shopping centre in Helsinki. In particular, Kaapo enjoys games with action and adventure. “It has to have a good storyline, not only fighting,” he explains.

His mother, who views that in some cases the age limits have been set excessively high, allows him to play some video games deemed suitable for ages 16 and older. According to her, rather than abiding by the limits categorically, parents should learn more about video games and rely on their own consideration.

She supervises the video gaming of her son carefully and looks up every game he wants in advance on the Internet. “If I consider the game a borderline case, I say that you cannot not play it alone, without your mother.”

Games containing sex, torture or excessive violence, in turn, are firmly on her blacklist. Kaapo is not allowed to play games deemed suitable for ages 18 and older, although many of his friends are.

Researcher Annika Suoninen views that the attitudes of parents have changed notably in recent years. “A few years ago, video games induced a moral panic. People unfamiliar with video games condemned all gaming. It became so excessive that it resulted in a counter-reaction.”