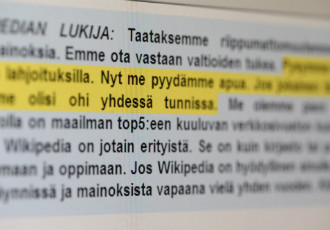 Wikipedia has recently launched a worldwide campaign to raise donations to cover, for example, its server and personnel costs.

Lasse Männistö (NCP), a Member of the Parliament who has actively participated in debates over crowd-funding and fund-raising activities, believes the authorities are acting within the limits of the legislation. The problem, he says, lies instead with Finland's Money Collection Act.

“The case demonstrates that the Money Collection Act should be overhauled,” he argues.

“The greatest flaw [in the legislation] is the requirement of a prior permission. It could be abandoned, and instead supervise collections after their completion. Organisations raising funds could report on their collections over the Internet,” Männistö suggests.

Wikipedia is an online encyclopedia primarily maintained by volunteers and funded by donations. The encyclopedia has justified its need for voluntary donations by arguing that were it to sell advertising space or depend on tax revenue, its independence could be jeopardised.

In Finland, regulations governing fund-raising activities are set forth in the Money Collection Act, which stipulates that all money collections require a prior permission.

The Police Administration has asked Wikipedia to explain why the plea has been published and why it should not be regarded as a fund-raising campaign. In addition, it has asked the encyclopedia to reveal how much the campaign has yielded.