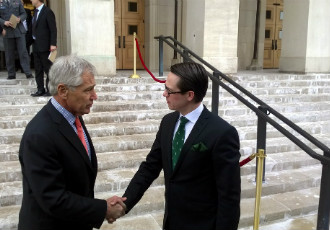 Finland is set to acquire hundreds of Stinger anti-aircraft missiles from the United States, Carl Haglund (SFP), the Minister of Defence, announced to US Secretary of Defense Chuck Hagel as the two met in Washington on Thursday.

“I'll sign the decision tomorrow or on Monday,” said Haglund.

Stingers are shoulder-launched short-range missiles that can be used to bring down helicopters, aircraft and drones. They will replace Finland's current arsenal of Russian-made missiles.

“We got them at an extremely competitive price,” Haglund stated.

With a price tag of approximately 90 million euros, the acquisition will, however, require the approval of the Cabinet Finance Committee.

Haglund also viewed that overall the defence co-operation between Finland and the United States is on a solid foundation. Moreover, equipment acquisitions from the United States – such as the recent acquisitions of Hornet jets and the compatible JASSM missiles – encourage further collaboration. “When you have the same equipment, it facilitates joint exercise arrangements,” the minister explained.

According to Haglund, the fact that the United States has agreed to sell, for example, the advanced JASSM missiles to Finland is an indication of trust. “I'm thrilled that we can buy the Stingers, because they are by far the best in the world for this purpose,” he also said.

Earlier this month, the Ministry of Defence announced that Finland will acquire one hundred used battle tanks from the Netherlands in a bid to upgrade its tank arsenal. The JASSM missiles acquired from the United States in 2012 are similarly extremely advanced technologically.

“Technological advancements – we must keep up to have credible and competitive capabilities,” underlined Haglund.