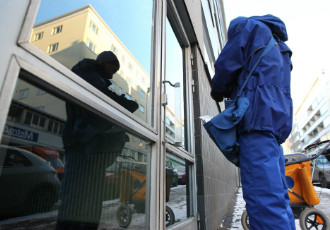 Shock was apparent on the faces of postmen in Kallio, Helsinki, when they heard about the redundancy plans announced by Itella on Thursday. “They are preparing for a situation looming ten years ahead, many years in advance,” a postman said gloomily.

The postmen were only willing to comment on the news anonymously.

Yesterday, Itella stated that it will initiate negotiations with its staff over the lay-offs of a maximum of 1,200 delivery jobs. If executed, the lay-offs would be the most extensive enforced by the postal services provider in the 21st century.

The company has cited the slumping demand for delivery services as justification for the plans.

The postmen in Kallio know what they are talking about. Thursday marked an overture to what experts have foreseen for some time now, the wind-down of postal services.

A study published last autumn by the Research Institute of the Finnish Economy (Etla) indicates that some 7,000 postal sector jobs will disappear by the year 2020, leaving no more than 15,000 people employed in the sector.

It is not hard to believe Itella executives when they speak about the greatest change in the history of the postal sector.

The delivery of messages has changed dramatically. Bills are sent directly to online banks, instead of sending letters people engage in discussions on social media, and print subscriptions have declined. All this gnaws away at the footing of postal operations.

Finns have browsed the Internet for years, but oddly enough the country managed to avert dramatic drops in delivery volumes until last year. In Denmark and the Netherlands, the volumes have plummeted by as much 50 per cent per year, Itella CEO Heikki Malinen pointed out on Thursday.

“In 2003 and 2007, delivery volumes slipped to record-low levels, but then grew again. There has been no recovery from the nadir of 2010. The decline has continued for two and a half years now,” he said.

One might imagine that the boom in online shopping would generate compensatory revenue for Itella. Malinen, however, said that the growth is not enough to counterbalance the decline in letter and newspaper deliveries. In addition, parcel delivery services require further investments, he noted.

Many are not convinced by Malinen's explanations.

Esa Vilkuna, the chair of the Finnish Post and Logistics Union (PAU), warns that the personnel cuts may jeopardise Finland's statutory five-day delivery schedule. “This may lead to some tasks not being done and the statutory service not provided.”

Heli Koski, a research director at Etla, believes Finland should consider whether postal deliveries could be scaled back to three days a week. At present, postmen scour even the furthermost letterboxes despite plummeting mail volumes.

In six months' time, letter volumes are expected to fall by some 50 per cent, estimate consultants who conducted a study for the Ministry of Transport and Communications. Were deliveries to be reduced only in remote areas, it would spark a heated political wrangle over regional equality.

The majority of Finns continue to oppose cuts in postal services. A study conducted by TNS Gallup last year found that only one in three Finns would be willing to move to a three-day delivery schedule.

Despite the dim prospects, Malinen has confidence in Itella. “Itella has delivered mail for 375 years, and we plan to continue to do so. Cost cuts are therefore necessary.”

The postmen in Kallio insist that they have noticed no change in the volumes of mail they deliver. “We are always in a rush,” one postman said. Another postman pointed out that the cuts will also impact service. He will chat with residents whenever needed regardless of whether or not he is in a hurry – due to work ethic, he says.