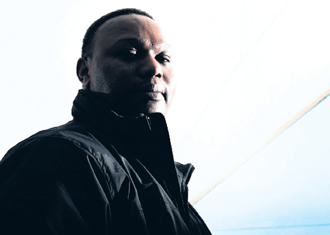 Originally from Senegal, Malang Cissokho first came to Finland over 20 years ago.

Summer 1996 and all of Finland is swaying to the African-Finnish rhythm of J. Karjalainen’s Electric Sauna. In his song Missä se Väinö on? J.Karjalainen wonders where that Väinö is and a soft voice replies: Alah ma ning mbe simajala / A-aaa Väinö.

“What is he singing?” many listeners wondered.

“I wished Väinö a long life with us,” explains Malang Cissokho, who gave the catchy tune a Senegalese twist at J.Karjalainen’s request.

“Jukka asked if I could write some lyrics for the last verse in the Mandingo language.”

Missä se Väinö on? was awarded the title of the best song of the year in the annual Emma music gala and papers feted Cissokho as a conga virtuoso. Pleased at the praise, the musician hung the gold and diamond records on his wall and embarked on a six-year stint as a percussionist in Electric Sauna.

“It was a good time in my life. Jukka had plenty of gigs and royalties were divided between the guys in the group all fair and square.”

These days, Cissokho does not drag a kora, a 21-string bridge-harp, or a set of conga drums around with him.

Instead, in the car park behind Café Ursula, there is black Mercedez-Benz with a yellow sign spelling out ‘taxi’ on top of it.

“Around the turn of the millennium, I was living in the fast lane. I was always on the go and not getting enough sleep. That kind of thing can happen to anyone.”

His resultant ill health forced him to leave Karjalainen’s band. He recovered with the help of medication.

“Now I make sure things don’t get out of hand.”

Time for something else

During his recuperation, music took the back seat but it was not long before he was part of the line-up of Galaxy, a group playing Senegalese mbalax music. At the same time, he was scraping together a living teaching djembe and conga drums at the Harju youth centre as part of an employment aid programme.

“I’d never done anything but rehearse and play at gigs and with friends. But I had to get to the youth centre by 10 o’clock every morning.”

“Just as well I’d had time to adopt the Finnish mindset of keeping at it and working hard. With my first performance royalties I bought a Toyota and a flat in Mellunmäki!”

The Harju youth centre became a thing of the past when he spotted an advert for taxi drivers. Now Cissokho has a close-up view of life in the capital from his driver’s seat, with the added perk of meeting new people.

“Customers want to have a chat. They ask where I’m from and why I came to Finland. And they are pleased when I say I’m the guy singing in Väinö. They go, wow, I’m being driven by a celebrity.”

Racist attitudes are not first and foremost on people’s minds when they climb on the backseat of a cab, says Cissokho.

“When it’s cold and dark outdoors, people just want to get back to the warmth of their own homes as quickly as possible.”

Only one of Cissokho’s customers has had second thoughts when seeing the colour of the cabbie’s skin. “I once picked a man from Hartwall Arena, who got out as soon as he saw a black man behind the wheel,” says Cissokho, mirthfully.

At the age of 26, Cissokho met Hasse Walli, the guitarist of the group Asamaan in a music bar in Dakar.

“Hasse Walli was looking for musicians for his band and found a singer in the bar. There was some sort of a row in Finland and I was called to the rescue.”

Asamaan played at the Laulumies music club and banged their drums in front of the Old Student House.

A job teaching the kora at Sibelius Academy and getting to know the members of the group Cool Sheiks meant that the West African musician had established his position in the musical inner circle of Helsinki.

Today, the sea looks much the same it looked on that day in May 1988 when the musical nomad arrived in Helsinki. Not much else remains the same.

“Houses have been built, and there are a lot more immigrants and tourists. Best of all, Helsinki has become more international.”

Cissokho does not pine for his old home country.

“I respect Senegal, after all I spent half of my life there and played with musicians such as the guys from Youssou N’Dour’s band. But I have been in Helsinki for so long that in Senegal I’m in a hurry to get back to Finland. The dirt in Dakar starts to bother a Finnish citizen used to a high level of hygiene.”

The Muslim, who prays once a day, says that he has taken some influences from the Finnish way of life, such as drinking wine.

“I played at the gig when Väinö turned 18. It was great to be at the party, playing his song.”