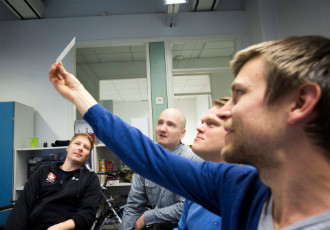 An Espoo company is offering the vacant half of its headquarters to start-up firms for virtually nothing.

THE OFFICE is jammed with the desks of three men and piles of stuff. In the centre of the room is a boxy 3D printer, which can crank out, for example, three-dimensional key rings.

This is the home of the seven-month-old Versoteq 3D Solutions in Suomenoja, Espoo.

The start-up firm moved into the recently-opened Quja campus after a tip from EnterpriseEspoo, a city-run provider of corporate services, which knew that Tecnotree Oy is offering office space to young companies in the vacant half of its headquarters.

Currently, there are 36 start-up firms in addition to Versoteq under Tecnotree's roof.

“There's enough room for 150 people. I don't know how many employees there are now in the campus. There are companies with one, two and three employees. Some have already outgrown this,” says Tatu Tahkokallio, the marketing director at Tecnotree.

Firms with no more than a handful of employees are increasingly common in the business circles of Helsinki. A recent report on business operations compiled by the Helsinki Region Environmental Services Authority indicates that as many as eight in ten companies in the region are small enterprises, employing a maximum of four staff members.

“[Altogether,] they employ more than 15 per cent of the region's personnel. That's hardly a marginal amount. Micro-enterprises and small enterprises have a significant role in the big picture,” says researcher Seppo Laakso from Urban Research.

Gaining admission to the Quja campus is a stroke of luck for start-up firms. Firms with three personnel can operate in the premises free of charge for their first year and have access to negotiation rooms, a gym and a sauna. For cleaning and internet services, Tecnotree charges 50 euros per person, while space for additional employees is available for a monthly fee of 100 euros per employee.

“When we vacated the space, we thought what's the use of keeping it warm. Let's bring in people that can inject drive also into our own staff. You never know what kind of collaborative schemes it can spawn!” Tahkokallio muses.

Versoteq's Rauno Huttunen and Timo Yletyinen recognise the benefits of the business campus. Their company is developing a software that allows anyone to design and order three-dimensional objects online. “We've moved forward after chatting with neighbouring firms,” CEO Petja Kärki acknowledges.

For some, the number of small companies is, however, a concern. Pia Pakarinen, the CEO of the Regional Organisation of Enterprises in Helsinki, deems it a concern that companies established in recent years remain small. “Can we find companies that also want to grow?” she asks.