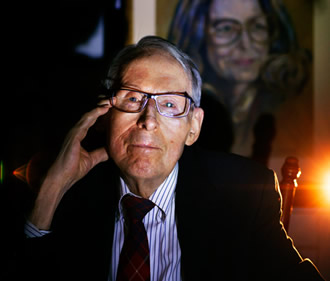 Both had been sexually active for many years but neither of them had considered themselves as a performer sexually. But somehow their mutual sense of commitment and respect and the desire to please each other elevated their lovemaking to a new and unexpected level. They had found what Jaakko later described as “the pleasure of giving pleasure.”

Established in 1939, The Library of Living Philosophers is a series of books, each of which is dedicated to one of the 33 most distinguished philosophers in the world. This illustrious group includes such well-known names as Bertrand Russel, Albert Einstein, Karl Popper, Jean-Paul Sartre and A.J. Ayer and, as the only Nordic philosophers, the late Georg Henrik von Wright and his protégé Jaakko Hintikka.

While von Wright appeared in the public eye as an intellectual who actively engaged in debate on social questions, not much has ever been known of Hintikka. What is understood is that he is very intelligent, highly esteemed and interested in extremely complicated topics.

Being reserved by nature, Hintikka has been perfectly happy with this state of affairs. Timid, shy and occasionally even panic-stricken is how Hintikka describes himself in his new biography She Chose Merrill Hintikka as Her Name, the book that the passage at the beginning of this article is taken from.

Hintikka has specialised in game-theoretical semantics, distributive normal forms and possible worlds semantics but never in juicy personal revelations. He has never opened his homes in Finland or the US to the media or appeared in a magazine with his wife.

But now Hintikka has published a book that changes everything we have ever known about him in one fell swoop. The book is not only the biography of Hintikka’s second wife, philosopher Merrill Hintikka, but also a passionate love story.

Move to the USA

The young genius moved to the United States in 1964 when he was appointed a visiting professor at Stanford University. After that, he has worked as a professor at the Florida State University and Boston University.

It was the end of 1975. The cream of the East Coast’s philosophy community had gathered in Statler Hilton Hotel in New York for their annual get-together. At the dinner, Hintikka bumped into Merrill Provence, a university lecturer he had met already during his years at Stanford in the mid-1960s.

During their conversation, Hintikka discovered that the 36-year-old Merrill was going through a divorce, while Hintikka himself has been married for two decades, happily as far as he knows.

After the dinner, Hintikka and Provence carry on their chat in the hotel lobby.

And what follows defies description. They find themselves in a sphere of their own where their physical surroundings lose their meaning and only the two of them are real.

The conversation continues in Hintikka’s room and finally in his bed where Hintikka and Provence make love “tenderly, albeit clumsily”.

That first night is followed by many more and soon the lovers are inseparable.

When talking of their love, Jaakko has to resort to turns of phrase that are very different from the language he has used in his work: the flame that was lit at their first meeting became an all-consuming blaze.

Looking back in print

In an interview with the Helsingin Sanomat monthly supplement, Hintikka explains that he had two reasons for writing the book now, 27 years after his wife’s death.

“I have always wanted to tell the whole world what a remarkable person Merrill was. I also wanted to fathom why we were so important to each other. And perhaps there was also a slight ulterior motive: I wanted to inspire youngster to take up a career in research by showing that researchers are not just thinking robots.”

Hintikka says that his low self-confidence has sometimes put obstacles in the way of his work.

“It takes a considerable amount of confidence to enter new fields, presenting new ideas. I did not always have that kind of courage.”

All this changed when he met Merrill.

But he was not her first important lover.

The young intellectuals of the 1950s enthused about existentialism. The French philosopher Jean-Paul Sartre wrote hefty tomes that very few people understood but many quoted. Sartre talked about the freedom of choice and about how people are not what they were born to be but what they decide to be.

A young student of philosophy from California was among the followers of Sartre’s thoughts, a woman who from a very young age had been prone to sudden changes of direction. And as a result of one such decision she had become the mistress of the most powerful man in the world.

This is how Hintikka describes the events in his book:

In 1958, Senator John F. Kennedy visits Mills College during his tour of California. As part of the visit’s programme, Kennedy takes part in a discussion with a group of students, with a 19-year-old Jane Merrill among the select few.

During the conversation, the young woman takes the senator by surprise with her knowledge of the notorious trade union Teamsters. Afterwards Pierre Salinger, Kennedy’s press secretary, invites Jane to a one-on-one meeting with the Senator.

First Merrill innocently thought that the senator wanted to hear more about Teamsters but Kennedy had other things in mind. The pair became lovers.

The affair continued with the two of them meeting when it suited Kennedy. Merrill kept the affair a secret, only telling Hintikka about it almost 20 years later but revealing very little even then.

Merrill only ever revealed one intimate detail about John F. Kennedy: “He cried almost every time after we had made love.”

During the interview, Hintikka talks of his feelings on being compared with such a well-known ladies’ man as Kennedy.

“Their affair was in the distant past by that time. So there was no jealousy on my part but of course you had to wonder if you were found wanting in that contest. But this is something I touched upon in my book.”

It turned out that Jaakko was more worried about comparison with formidable previous lovers, such as Kennedy, than with any current competitors. Merrill astounded him by saying: “It is not just that you are more intelligent than him and that I have enjoyed sex with you more. You are also something he never was: a good, humane person.”

Return to Finland together

Six months after their first night together, Merrill and Jaakko moved to Finland where Jaakko held a post as an Academy Professor.

Love made them blossom. Merrill completed her doctoral dissertation and Jaakko learned to enjoy life.

The couple married in 1978 and Merrill chose a new name for herself, her fourth. She was born Jane Merrill Bristow but dropped ‘Jane’ while at university. Now she became Merrill Hintikka.

Their 11-year union came to an end only a few hours into the year 1978 when Merrill Hintikka stopped breathing in her sleep. The combination of a chronic pulmonary disease, smoking and a cold took their toll.

Merrill was buried in a cemetery in Tuusula, as she had requested. She was only 46 years old at the time of her death.

The passages in italics are quotations from Jaakko Hintikka’s book She Chose Merrill Hintikka as Her Name (Hän valitsi nimekseen Merrill Hintikka) published by WSOY on 7 January.