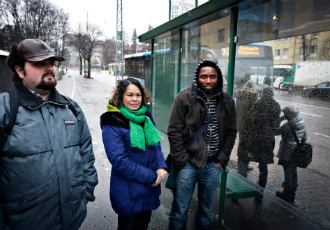 THE REFORM of Finland's integration services in the late 1990s has been a considerable success. A study by the Government Institute for Economic Research (Vatt) indicates that the reform resulted in a 47 per cent jump in the income levels of the immigrants who participated in the integration programme.

The results are particularly impressive in light of the fact that spending on the services was not increased as part of the reform.

“The idea is typically that results can only be achieved by providing additional resources – that is, money. Our study shows that results can be achieved also by handling things better,” says Matti Sarvimäki, a researcher at Vatt and the Aalto University. Sarvimäki conducted the study in co-operation with Kari Hämäläinen, a chief economist at Vatt.

Finland woke up to the rising number of immigrants in the 1990s, when immigration into the country began to increase.

In 1990, foreign citizens only accounted for 0.5 per cent of the country's population, according to Statistics Finland. At the end of 2012, the share had increased to 3.6 per cent, which – despite remaining modest in comparison to a number of other Western countries – is an indication of rapid changes.

In the 1990s, officials had relatively little experience in providing integration services to immigrants – a fact that was manifested in several glitches.

Currently, the unemployment rate for immigrants according to the Ministry of the Interior is over three-fold that of the native population. Similarly, the income level of immigrants remains, especially in their first year in Finland, notably below that of native Finns.

In the 1990s, immigrants were still provided job-seeking training designed for Finns, which – for the immigrants who only had little if any Finnish skills – proved inefficient.

In the May of 1999, a new act on the integration of immigrants was introduced, obliging officials to draw up individual integration plans for every unemployed immigrant who have been in Finland no longer than three years.

In larger municipalities, immigrants were also divided into groups according to their language and other competences. Employment offices – the current TE Offices – also began underlining the significance of language instruction and personal integration plans for the successful integration of immigrants into the Finnish society.

Previously, no discernible difference had existed between the employment training of native Finns and immigrants. The reform of the training services, however, began yielding results.

The study conducted by Sarvimäki and Hämäläinen finds that immigrants who used the new integration services coped markedly better than the control group.

“The reform is rather interesting. Essentially, it only urged [authorities] to do things more efficiently. In addition, people at employment offices were granted more leeway to decide on rational measures to promote integration. This, our study shows, seems to have worked,” Sarvimäki comments.