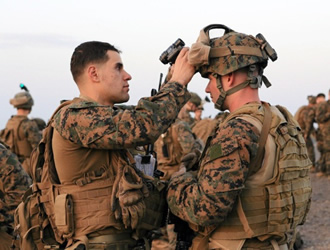 Military exercise part of a training exchange between the two countries.

The infantry of the Finnish army is helping the United States Marine Corps (USMC) train for winter and urban warfare with nearly ten marines attending training in Finland this month.

Brigadier General Petri Hulkko from the Army Command says that the military exercise is part of a training exchange in which Finland has already participated before with the US army Special Forces attending training in Finland last time.

This time the training is organised by the Jaeger Brigade in Sodankylä, which specialises in Arctic warfare, and the Guard Jaeger Regiment in Santahamina in Helsinki, the main task of which is to train troops in urban warfare.

“USMC is like the Finnish Defence Forces in miniature, comprising all military branches. We have a lot in common,” says Hulkko.

Just like the Finnish Air Forces, USMC uses Hornet fighter jets. USMC is one of the five US military service branches, along with the Army, Navy, Air Force and the Coast Guard.

The first group of Americans will commence their training with the Jaeger Brigade this week, focusing on operations in winter conditions. Next week and the week following, the second group will attend training in Helsinki involving battle exercises in urban environment.

The American marines participating in the programme are non-commissioned officers in rank. The Finnish Defence Forces will send trainees to courses organised by the US Navy later on during the year.

“We can’t reveal who will be sent to the training. We don’t know as yet what courses will be organised that could benefit our defence. Sniper training is something we would find useful,” explains Hulkko.

According to the Defence Forces, the goal of the training cooperation is to develop the national defence ability. The results of the collaboration will be assessed before deciding on the continuation of the programme in autumn 2014.