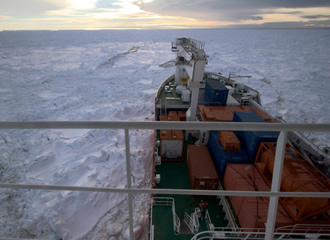 Freeing ships trapped in the ice in the Antarctica is simple in principle, according to Pentti Kujala, professor currently researching ice conditions in the region. In practice, such rescue operations are complicated by the ice floes, which are especially “massive” this year.

Kujala is on board an icebreaker that is carrying Finnish researchers studying the impact of such dense ice floes on vessels.

The passengers of the Russian research vessel Akademik Shokalskiy, trapped in the ice on the Christmas Eve, were evacuated by a helicopter last week after the Chinese icebreaker Xue Long assisting the Russian ship also got stuck in the ice. Now an American icebreaker is on its way to rescue the Chinese vessel.

Kujala says that the icebreaker must free the trapped vessel by breaking the surrounding ice and then tow it towards open water if the ship cannot get moving under its own steam.

”It’ll be a challenging task for the American vessel,” predicts Kujala. According to the news agency APF, the American icebreaker Polar Star is capable of continuously breaking ice up to 1.8 metres thick while travelling at a steady pace and can break ice more than six metres thick by ramming. Surrounded by ice that is up to four metres thick, the Chinese vessel lies about 21 kilometres away from open water.

Xue Long can try to free itself off the ice as the Polar Star will only arrive in a week.

Vessels trapped in ice are usually not in immediate danger.

”The vessels designed for these conditions can usually take the pressure because they float with the ice. This doesn’t usually carry any risks as the waters here are so deep. Unlike in the Baltic Sea, getting stranded is unlikely,” Kujala told Helsingin Sanomat.

”Of course the pressure caused by the ice can increase so much it dents the ship frame.”

Kujala, who works at Aalto University, is in the Antarctica on a South African icebreaker, the Agulhas II. He is accompanied by Jonni Lehtoranta from the Finnish Meteorological Institute and Jakke Kulovesi, also from Aalto University.

Like 60 per cent of the icebreakers in the world, both the Agulhas and the Russian Akademik Shokalskiy were built in Finland.

According to Kujala, the conditions in the Antarctica are much more severe than in the Bay of Bothnia:

”Our measurements show that the ice cover here can be up to three metres thick and in places, the ice floes are pushed into walls that can be three to four metres high above the water and reach the depth of dozens of metres under the water. In comparison, the ice thickness in the Bay of Bothnia doesn’t usually exceed one metre,” Kujala explains.

The Agulhas II just arrived in South Georgia Island after dropping South African researchers off a researcher station on the Antarctica.

“Progress was very slow in the severe ice conditions and we got stuck on several occasions but managed to free the vessel by transferring the water ballast in the tanks from one side of the vessel to the other and hanging a heavy container from a crane of the ship,” says Kujala.

The idea behind the procedure was to get the vessel swaying, easing the friction caused by the ice and allowing the vessel to back out of the dense ice.

The vessel construction and shape of the frame are essential factors in determining whether a ship can manage in thick ice.

“Icebreakers’ rounded shape helps them avoid getting stuck in the ice,” explains Kujala.

For research purposes, Finnish researchers equipped the Agulhas II with measuring devices already at the Rauma shipyard in autumn 2011.

The researchers are interested in studying under how much pressure the ice floes put the vessel frame and propelling devices and the tension caused to these structures.

“Not much large-scale research has been carried out in this region in recent years,” states Kujala.

Besides the Finnish Meteorological Institute’s device, which measures the thickness of the whole ice mass, the researchers are using an imaging device that determines the thickness of the piece of ice that turns against vessel frame.  The study is financed by the Academy of Finland and the Finnish Funding Agency for Innovation (Tekes). The shipbuilding companies STX and Aker Arctic, the engine manufacturer Wärtsilä and the ship equipment manufacturer Rolls Royce are also involved in the project.