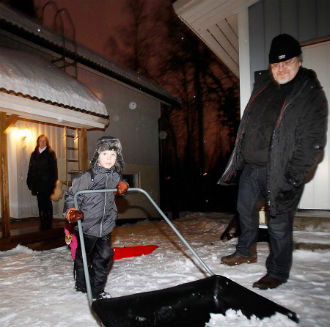 Catkins were growing on farmer Mikko Mäkelä's farm in Vihti on Friday. During the whole early winter the household has followed the nature under a false alarm.

"Autumn sowings mistakenly blossomed as early as November. At that point I began to wish for colder temperatures," Mäkelä says.

Temperatures have been mild for long. Helsinki saw the eighth consecutive month warmer than usual.

According to meteorologist Ville Siiskonen from the Finnish Meteorological Institute Finland has remained in the sphere of southwestern air currents. The whole year is predicted to be two degrees warmer on average.

"We have not had any cold, more Arctic air flow from the North at any point. This long depression involves also the autumn storms Finland saw.

The damages caused by Seija storm were removed on the Mäkelä farm still on Friday.

"The forest fell down from the same spots as during the Tapani storm a couple of years ago. We lost a pine from the yard to Tapani and now Seija took another," Mikko Mäkelä describes.

Meteorologist Ville Siiskonen claims that the storms were not exceptional. They are more of a rule to warm autumn periods. Instead what was exceptional was March, which was so cold that it does not happen every decade.

In Helsinki's Kaisaniemi it was 18.4 degrees below zero on March 14th. There was half a metre of snow on the ground in Kaisaniemi.

If the spring began as a cold one it ended in heat in May. Districts around Finland saw records broken in the Finnish Meteorological Institute's 30-year statistics.

The last day of May in Utsjoki was 30.5 degrees, which was also the highest temperature of May in Finland.

Due to the hot spring summer also began exceptionally early in Lapland, up to a month ahead of time. The early summer also continued for a month longer than usual.

Heikki Guttorm from Utsjoki planted potatoes three weeks early. "It was a wonderful summer. There was no frost and potatoes grew to be big. Now we eat them in secret from the neighbour."

It was also rare that the first fishing trip involved a swim at Teno. "It was so hot," Guttorm remembers.

2012 was a particularly rainy year. This year has seen slightly less rain than usual in most parts of the country on average.

Only regions north of the Oulu-Northern-Karelia axis saw a white Christmas. Instead the northernmost regions of Lapland had snow as early as November, and Enontekiö had their own statistical record of 30 years: 18 centimetres.

Early December involved brief frost. The lowest temperature of the year was measured on 9 December in Vuotso of Sodankylä at -39.7 degrees.

A stark shift into warm temperatures occurred right after the cold. The air warmed up to above zero in a day or two, when mild air from the Southwest replaced the high pressure. The air will not grow significantly colder even in the upcoming days. A temperate current will likely persist over the New Year.

The Finnish Meteorological Institute predicts that the year will change in rainy weather.