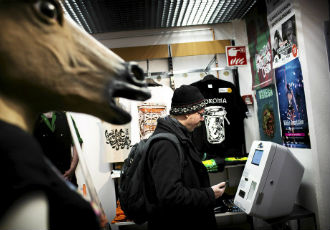 STARTING today, it is possible to buy the digital currency known as bitcoins in Helsinki, following the unveiling of Finland's first Bitcoin vending machine in the record shop Levykauppa Äx in Asematunneli, a shopping centre in down-town Helsinki. By inserting euro notes to the machine, it will transfer an equivalent amount of bitcoins to the depositor's digital wallet.

Henry Brade, the chief executive of Prasos, the company behind the website Bittiraha.fi, estimates that the vending machine is also the first of its kind in Europe. The world's first Bitcoin vending machine was unveiled in Canada's Vancouver in October.

The digital currency, launched in 2008, is distributed through a peer-to-peer payment network and, in contrast to traditional currencies, is maintained and influenced by a volunteer open-source community.

Bitcoin is attracting increasing media attention especially due to the dramatic fluctuations in its exchange rate. Currently, the value of a single bitcoin is approximately 630 euros, but in January the currency was valued at roughly 70 euros.

For the time being, however, only a handful of shops in Finland accept bitcoins as payment.

Levykauppa Äx' shop in Asematunneli began accepting Bitcoin payments on Monday. According to shop supervisor Oskari Kivimäki, the digital currency fits the profile of the chain, which is already known for its quirky stunts, like a glove.

“For the sake of experimentation and messing about,” he explains.