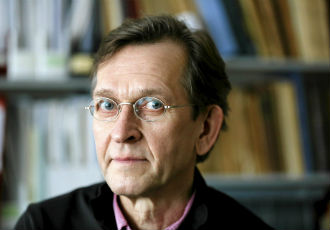 THE DISTINGUISHED legal scholar jolts from his chair and strides intensely across the room. “Its impact on Finnish democracy may be equivalent to the EU membership. Essentially, it's a transfer of power from public authorities to an arbitration body, where a handful of people would be able to rule whether a country can enact a law or not and how the law must be interpreted.”

Professor Martti Koskenniemi, an expert in international law, does not oppose tariff-free trade or American investments in Finland. Yet, he is very concerned about the Transatlantic Trade and Investment Partnership (TTIP), which is currently being negotiated between the European Union and the United States.

More expressly, he is concerned about the investment protection regime incorporated in the pact.

Typically, corporations investing in unstable economies demand that their investments be protected. The member nations of the European Union, however, have democratically elected regulators and progressive legal systems. Do corporations indeed need protection against EU decisions? It seems they do.

The TTIP provides that a body shall be established to allow corporations to file complaints against discriminatory treatment and claim damages from the country in question. In general, disputes arising from bilateral agreements are settled by the International Centre for Settlement of Investment Disputes (ICSID), a World Bank body.

Over a half of the disputes brought to the ICSID have been resolved by 15 jurists with no legal responsibility. The same people can also represent parties in disputes. Because the body has no permanent composition, its rulings lack cohesion, Koskenniemi argues.

The problem, he views, is the assumption attached to the body that all investors act in good faith – bona fide.

“Investors acting in mala fide are not accounted for. If the EU and the United States agree to set up a body similar to the ICSID, law firms will wrangle on every possible clause of international legislation. It's infuriating that this has not been taken into consideration in the talks.”

The press reports on complaints. Energy utility Vattenfall is demanding billions of euros in damages from Germany for its decision to abandon nuclear power and to shut down a coal-fired power plant in Hamburg. Tobacco company Philip Morris, in turn, initiated legal action against Australia after it decreed that cancerous lungs be imprinted on cigarette packs.

The complaints may be groundless, but they may nevertheless mount pressure on a nation to seek a settlement outside the courts – by for example vitiating or abrogating the law.

Such disputes, Koskenniemi says, arise ordinarily in domains strictly regulated by the state. In Finland, clauses of social, employment or environmental laws would be particularly susceptible to disputes. A foreign mining company could, for example, initiate legal action against Finland for restricting its operations.

The adoption of a procedure similar to that of the World Trade Organisation – a permanent body controlled by the member states the decisions of which are non-appealable – would be a better alternative, Koskenniemi suggests.

“Otherwise, the power of public authorities would be transferred outside the EU. The arbitration body would supervise the legality of Finnish laws as if the Parliament's Constitutional Law Committee.”

Both the EU and the United States have pursued the free trade pact enthusiastically, considering NSA whistle-blower Edward Snowden a spoilsport who nearly jeopardised the negotiations.

The European Commission has advertised the free trade pact with a study on its dynamic impact commissioned from the London-based Centre for Economic Policy Research (CEPR). According to the CEPR, the pact would boost EU exports to the United States by up to 28 per cent and, by 2027, enhance the bloc's output by 0.5 per cent. The annual disposable income of a household of four would consequently increase by 545 euros.

Discordant views voiced by legal scholars and civic organisations have extracted a response from the European Commission. The commission's communication strategy, leaked to the media in November, reveals that the commission has tried to determine boundaries for the debate through “positive communication”.

The commission's web-page is indeed positive: “The EU is very good at negotiating free trade agreements.” “Do I have to worry about existing EU standards of consumer, environment or health protection? No.”

The poster-boy for the negotiations in Finland, Alexander Stubb (NCP), the Minister for European Affairs and Foreign Trade, remains confident in the benefits of the free trade pact. Resistance to the talks, he suggests, stems from the fact that the partnership would bring together what many believe are four evils – the EU, the United States, free trade and globalisation.

Stubb also foresees no problems in the arbitration procedure.

“It's easy to paint a bleak picture of the investment protection regime. American firms investing in Finland will comply with Finnish laws. The idea of an American company coming here and changing the Finnish environmental legislation is fiction.”