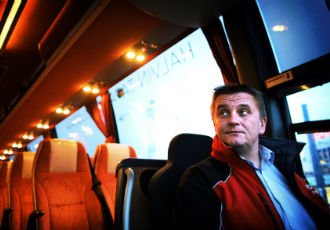 Pekka Möttö founded the public transport company Onnibus two years ago and plans to make it the largest in Finland by 2020.

THE COACH is on its way from Tampere to Helsinki, enveloped in the autumn greyness. Before arriving in Hämeenlinna, the driver picks up the intercom.

“Ladies and gentlemen, I have great news. The Supreme Administrative Court decided today to allow Onnibus to start operating a route to Turku, despite the legal action taken by our competitors in an attempt to prevent that. This means that the tale of Onnibus will not come to an end at Finnish courts.”

The man behind the wheel is Pekka Möttö, the managing director of Onnibus. For him, the Supreme Administrative Court's ruling is a personal triumph in his crusade against the “legal cartels” in Finland's public transport sector.

A few months later, he sits in a restaurant operated by one of Onnibus' competitors, VR, at the Helsinki Central Station and tells his story.

Möttö inherited his affection for buses. His grand-father Pekka Möttö founded the bus company Möttö in Sortavala in 1930. The business was taken over by Lauri Möttö, who passed away three years ago, leaving the company to his son.

Möttö still drives a couple of routes per week alongside his executive duties.

“If things turned out so bad that the Onnibus business went under, I'd get back behind the wheel. I'm lucky to have a couple of friends at small coach operators who have agreed to take me in on a two-hour notice, if necessary,” Möttö says, smiling.

For the time being, also Onnibus remains a small operator, but Möttö's goal is to grow it into the largest public transport operator in Finland by the end of the decade.

From his perspective, public transport has been a closed sector, full of legally sanctioned cartels and obstacles for outsiders trying to disrupt the status quo.

In 2009, the legislation was revised to gradually de-regulate public road and railway transport services. The railways are set to open for competition in 2025 and some Helsinki region routes already at the beginning of 2018, which is when Onnibus will also venture into the tracks, Möttö has decided.

“Everything has gone according to plan. The only setback was the decision this autumn to extend VR's railway monopoly by five years. You can only imagine how they wined and dined politicians in log villas last summer.”

The autumn also brought good news: Onnibus was awarded the contract to operate most inner-Jyväskylä public transport routes and is to begin operations there next summer. In Tampere, the operator won one route but lost most of the tenders, similarly to Oulu and Lahti.

Local routes, Möttö says, are safe, but the fate of the company hinges on the longer inter-city routes. They are a risky business. Onnibus has managed the risks by franchising, with half of its drivers self-employed as entrepreneurs who are responsible for their own equipment.

“We'll get foreign investors in the future, ones that have experience in the sector. We will not accept only money. That would only mess up the operations.”

When Lauri Helke rang Möttö after resigning as the head of planning at VR in November 2011, his plan was to invite Möttö for a casual lunch. The two did not know each other in advance, but after the lunch they had devised a strategy for the new company.

“The profitability of coach operators has relied on parcel services. We knew three things: we would not get income from parcels, we would not be incorporated into Matkahuolto's information system, and we would not be able to use state-subsidised tickets, such as regional tickets. We had to create our own competitive assets.”

Those assets are competitive speed and fares, and online visibility. Onnibus coaches operate between cities with no stops in between. The price policy is akin to low-cost airlines: the earlier you buy the ticket, the lower the fare. The price of a trip from Helsinki to Tampere, for example, ranges from 3 to 20 euros.

On New Year's Day 2012, six weeks after the lunch meeting, the first Onnibus coach departed from Tampere toward Pori with all of the company's employees aboard – Helke behind the wheel and Möttö as the “trip host”.

The two had estimated that were the venture to flounder, they would not lose more than 300,000 euros. When the first Onnibus coach approached its platform in Tampere, there was a line of people waiting. Möttö and Helke knew then for the first time that they may well succeed.

Today, Onnibus operates 15 coaches. In its first year in operation, the company broke even, enabling it to remain in operation without loan money.

“The banker was really surprised and wished us good luck.”