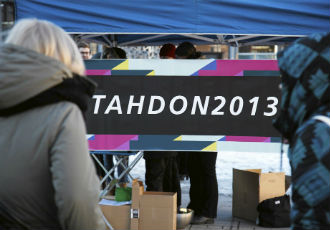 Nearly 170,000 Finns have voiced their support for the initiative.

THE CITIZENS' initiative for equal marriage laws was presented to Eero Heinäluoma (SDP), the Speaker of the Parliament, on Friday morning by representatives of the Tahdon2013 campaign. As envisioned by the sponsors, an equal Marriage Act would grant marriage rights to same-sex couples, who are currently allowed to register their partnership but not entitled to the same rights as married couples.

The citizens' initiative is an instrument of direct democracy, essentially allowing the presentation of initiatives with a minimum of 50,000 statements of support to the Parliament for consideration.

Under a provision adopted to the Finnish Constitution in March 2012, the Parliament is obliged to consider all citizens' initiatives presented to it. The initiatives are then referred to a parliamentary committee designated by the Speakers, which can approve, amend or reject the initiative at its discretion.

When receiving the initiative for equal marriage rights, Heinäluoma promised that it will be considered in a careful and serious manner.

“It's clear that this will be taken into consideration,” he said, estimating that the initiative could be debated in late February.

“As is customary, the Speaker refrains from commenting on the matter under consideration,” Heinäluoma replied when asked whether he would vote for or against the initiative.

“I truly believe this to be the first citizens' initiative that can obtain the approval of the Parliament. What's relevant here is how the campaign has demonstrated how significant an issue this is for Finns,” campaign activist Milla Halme stated.

The initiative for equal marriage rights gained the minimum requirement of 50,000 signatures within hours of its launch, on 19 March 2013. By 19 September, at the end of the collection period, 167,000 Finns had expressed their support for the initiative, mounting pressure on the Parliament.

The goal of gender-neutral marriage laws was not inscribed in the government programme due to opposition from the Christian Democrats.