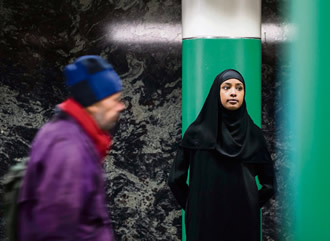 Maryan Abdulkarim is used to slander and knows what to do when confronted by passers-by.

THE MAN was in his sixties, sober. He had something to say, and decided to make himself heard in the middle of the street in Kontula, Helsinki.

“Somalis stink! You're all criminals!” he shouted.

Maryan Abdulkarim, 31, was walking with her friend and two children when they were interrupted by the slur. Used to such insults, the women knew immediately what to do: they switched to Finnish and asked the man to stop – that usually helps. But not this time. Instead, the man spat Abdulkarim in the face.

The man was accompanied by a woman roughly the same age as him. Also others passed by, but no one intervened.

Abdulkarim has been a Finnish citizen for 24 years and has harsh words to say about her home country. “Finland is a very racist country, has always been.”

White Finns do not necessarily notice it, because racism does not concern them. Abdulkarim, an activist and an expert in multiculturalism, makes a comparison to people with physical disabilities: if you have two healthy legs, you do not stop to consider what it would be like to move around Helsinki in a wheelchair.

“You need to have an aware mind to notice things around you. Some react by thinking that they are awful people if they don't notice racism. Others, in turn, deny racism, maybe thinking that admitting would make them racists, because they are part of this society.”

Slurs are one indication, but immigrants notice racism also because they are not recognised as Finns. If Finns are automatically thought of as white, Finnish-speaking Christians, the definition leaves out quite a large group.

“Whether you are from an immigrant background or a dark-skinned adoptee, you are often treated as a representative of another culture,” Abdulkarim says.

“And when a random passer-by calls you a negro in the middle of the street, it's not only a question of this one insulter. The culture in the background allows some people to feel superior to me and to feel like they have the right to use that word.”

Slurs, therefore, are more than slurs, and allowance by most of the population creates room for racism, Abdulkarim views.

“We have a very vocal racist segment. Their comments are not criticism but rather slander, subordination and racism. Why not take part somehow? Visit the old people's homes to read a book to veterans of wars instead of posting anonymous comments online,” Abdulkarim suggests.

The phenomenon is hardly new, she reminds, referring to the discrimination experienced by the Sami and Roma people. Alongside immigrants, Abdulkarim views, these people are not considered equal members of the society or actors with an equal right to a voice.

“You do hear about duties. I doubt that no one who has moved here is unaware of the law or what they have to do – when in Rome, do as the Romans. But there's little about rights.”

Immigrants want to develop Finland just like anyone else, Abdulkarim argues. Yet, they are not readily accepted as part of the Finnish society or seen as individuals but rather as representatives of their culture.

“You have to work three times as hard and assert that you are part of the society to be accepted as part of it. No one should have to constantly justify their existence,” says Abdulkarim.

People aware of this are driven to over-exertion, as Abdulkarim has been in every job she has had, although no one was asking her to. Why then? Because everything she does affects the reputation of other Somalis as employees.

She has been praised for being “a good and bright Somali”, in contrast to “the lazy ones”.

Abdulkarim still clearly remembers the Lentävänniemi library in Tampere, where she used to go every day after school and immerse herself in every possible book. The librarians knew her, took her under their wing, and left her with plenty of fond memories.

“I remember this one big and bearded librarian particularly well. Whenever I tried to borrow something from the grown-ups' section – Perry Mason novels, I think – he would say no, not yet, with a smile on his face,” she tells and laughs.

On the ninth grade, when Abdulkarim was dreaming of an academic degree, her school counsellor urged her to be more realistic. “Think of a more reasonable job, a practical nurse or something, they said.”

“She maybe thought that my language skills would be insufficient or that I wouldn't find a job due to my background.”

Abdulkarim spent her childhood and formative years in Tampere, where she alongside her mother and sisters had been placed in a reception centre. Her father, who worked as an university teacher, came to Finland a few years later. Her parents have since divorced.

The counsellor’s advice stuck with her although her family encouraged her to study. After completing compulsory education, Abdulkarim worked as a courier for a year before going to high-school. After that, she trained for “a reasonable job”, a baker-confectioner. Only later did she decide to study for a degree in sociology.

With no one to idolise, Abdulkarim looked for people she could identify with from the African-American culture. In high-school, she listened to Mos Def, Common and Black Star, and read about Malcolm X.

She also grew interested in voluntary work and got involved in the activities of the Red Cross.

“From the other side of the Atlantic, I was able to find people who looked like me and were successful in what they did. I realised that although I am a black woman in a scarf, it doesn't make me bad. It's sad that I had to go all the way to the States for that idea.”

Abdulkarim applied for her first summer job as a teenager. She was promised the job over the phone by a friendly lady, who asked her to drop by to sign the contract. Abdulkarim hurried, but when she offered her hand to the lady in greeting, the lady took two steps back.

“She was totally confused. Was it you who called, she asked. Then she went back on her word, saying that there had been a misunderstanding.”

Abdulkarim regretted her choice of trousers and did not realise until later that there was nothing she could have done different.

In the working life, we could. According to Abdulkarim, women from immigrant backgrounds are presently only deemed suitable for manual work. Foreign qualifications are not recognised, and even highly-educated people are re-trained for the service and care sectors.

“It's not enough to have bus drivers and practical nurses. True equality would mean that people from immigrant backgrounds are in various jobs in various sectors,” she says.

What ever happened to the man in the beginning. Abdulkarim marched into the Itäkeskus Police Station to file a report of defamation. She was told by an officer that because such incidents are so common filing the report is not really worthwhile. It would be hard to locate the offender afterwards, and the case would likely remain unresolved.

Many consequently opt against filing a police report, whereby statistics do not tell the whole truth.

“People from immigrant backgrounds are targeted in violent attacks. Often, these are treated as isolated acts caused by mental health or substance abuse problems.”

“If you are at all aware, this kindles your desire to change the world. Children here grow into the idea that they are inferior.”

As a result, Abdulkarim turned to activism. Earlier this autumn, she participated in establishing the anti-racism network Antiracism X, the first objective of which is to compile a handbook for immigrants informing them what they should do if they experience discrimination.

“For me, activism is not an alternative. It's necessary if you want a genuinely equal society.”