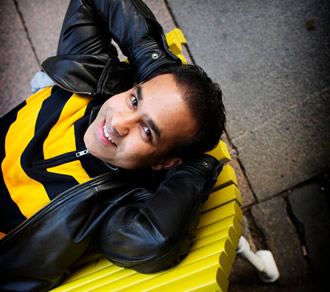 THE FINNISH Refugee Council has granted its second annual Mr. Immigrant award to practical nurse Ranjith Kumar Prabhakaran. The 39-year-old Prabhakaran lives in Hämeenlinna with his wife and is serving his second term on the town council. In addition, as part of his nursing studies, Prabhakaran is currently doing his on-the-job training at the Kanta-Häme Central Hospital in Hämeenlinna.

The Mr. Immigrant award is presented annually to an immigrant whose actions have had a positive impact on the society and their near environment.

Congratulations on your new title! How does it feel?
“As soon as I heard that I had been selected, I called my mother in India. I could tell by her voice how glad she was. And when I told my wife Minna, she almost started crying. It was a special moment.

When I arrived in Finland in 2001 and trained to become a practical nurse, I didn't understand why senior citizens were living in old people's homes. Old people with memory disorders are in my opinion treated with disrespect. A few years ago, I started organising outdoor activities for senior citizens with on a voluntary basis. I could see how important it was to them. Senior citizens do not belong in old people's homes! They should be allowed to live in their own homes, just like young people.”

What were you like as a child?
“Whenever my friends got into a fight, I would be the mediator. My parents have always trusted me. They never told me to stop doing what I felt was important. As a child, I did a lot of sports, played cricket and football. I have three siblings and my mother and father in India. I visit them a couple of times every year.”

How did you end up on the Hämeenlinna town council?
“When I started working with the aged, I was soon told that ‘Rantsi you should get involved in local politics’. I said no, I won't do it. But when the local Social Democratic group asked, I said yes. I'm proud to represent the people of Hämeenlinna for the trust they have given me.”

What should be done?
“Over 40 per cent of people in this country live alone. People say that they can manage by themselves, but that's a lie. Everyone needs other people, and Finland desperately needs a sense of community.

The history of Finland tells that we have risen from poverty and misery with perseverance and hard work!

I say that's no longer enough. We also need to love our neighbours. In terms of education, we are one of the world's best, right, but we still have problems. They come from the erosion of the family and loneliness.”