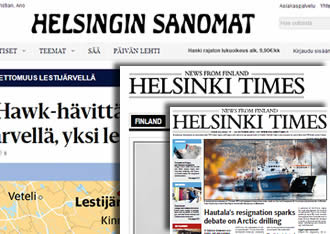 Quality articles from Helsingin Sanomat a welcome addition to the online and print content of Helsinki Times.

Through the agreement, the Helsinki Times website will become part of HS.fi, and titles of English articles will be placed on the Helsingin Sanomat web page.

“This is a great opportunity for us to reach a totally new international reader base. The cancellation of the English version of HS.fi a couple of years ago disappointed readers who enjoyed our high-quality articles in English. This cooperation with Helsinki Times addresses their needs,” says Petteri Putkiranta, president of Helsingin Sanomat.

“Helsingin Sanomat reaches a total of 1.9 million readers through different channels. Through the news in English, the reach of our content will expand to cover a larger market area and a growing target group,” says Putkiranta.

Established in 2007, Helsinki Times is a newspaper in English, available for subscription or purchase at newsstands. The print run is about 15,000 copies, and the website of the Helsinki Times has 8,400 unique visitors per week.

Alexis Kouros, the founder and editor-in-chief of Helsinki Times, is happy with the agreement.

“Through the quality journalism of Helsingin Sanomat, we can serve our international reader base, which is interested in what is going on in Finland, even better,” says Kouros.

In addition to Helsingin Sanomat articles, Helsinki Times will also continue producing content of its own.

As of 2 December 2013, the HelsinkiTimes.fi site will be accessible from the Helsingin Sanomat website at hs.fi/en and via the HS English link.