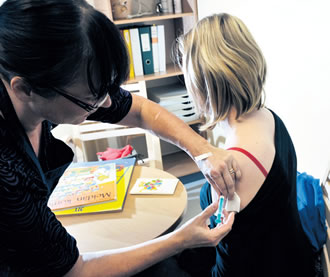 THE reason why some people developed narcolepsy after being vaccinated against the swine flu seems to be a substance in the Pandemrix vaccine, a study by the National Institute for Health and Welfare (THL) reveals.

The Arepanrix vaccine, used to inoculate people in Canada, increased the narcolepsy risk significantly less than Pandemrix, the vaccine of choice in Finland. The difference between these vaccines is the way their viral components are produced.

“Arepanrix has a different swine flu component,” explained Professor Outi Vaarala from THL in a conference for narcolepsy experts in Helsinki last Thursday.

Vaarala says that the viral component, combined with an adjuvant added to the vaccine to boost its efficiency, probably caused a reaction that activated the immune system, resulting in narcolepsy. Researchers believe that the disease can be triggered in several ways.

According to studies, people who developed narcolepsy after the swine flu vaccine showed a stronger reaction to the jab and had higher antibody levels against the vaccine components than their healthy peers. These people also had a genetic predisposition to the disease, having inherited a particular tissue type. Around 27-28 per cent of Finns have this genetic susceptibility.