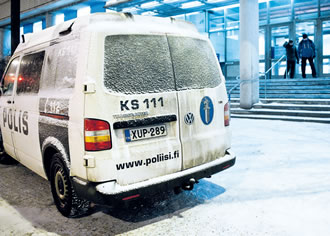 January’s scuffle in public library is linked to a right-wing extremist group.

DESPITE a warrant of arrest issued by the police, the third suspect of January’s stabbing in Jyväskylä City Library remains at large. “Investigation into the stabbing continues after we catch the suspect,” inspector Tuomo Korhonen of the Central Finland police said on 6 February.

Of the other two suspects, one remains detained while the other was released from police custody on 5 February upon a decision by the local district court.

Meanwhile, the police have largely determined the course of events, but continue looking into the incident’s background. According to the police, one of the suspects was carrying a bag of bottles and wearing goggles, protective gloves and a bulletproof vest. After being denied entry to the book launch event, the trio assaulted the security official at the door with fists and the bag of bottles. The stabbing victim, a man who came to help the security official, is believed to have used a telescopic baton and been carrying an edged weapon. A chair was also thrown at the trio, as they fled the scene promptly after the scuffle.

Extremist organisation linked with a number of incidents

The incident has been linked strongly with the Finnish Resistance Movement (SVR), an organisation that has publicly declared its National Socialist sympathies. “The Jyväskylä incident was the first time the organisation’s actions caused widespread commotion. They are responsible for roughly eight attacks or clashes over the past few years. This was the first time an edged weapon was used,” says Jussi Jalonen, a researcher at the University of Tampere.

For example, the extremist organisation was behind July’s pepper spray attack on Dan Koivulaakso, a left-wing politician, during a seminar on sexual and gender minorities in Oulu. In addition, it has been linked with an assault on a National Coalition member at polling booths and a petrol bomb strike against a student union in Oulu in 2010, as well as the tear gas raid against the Helsinki Pride parade in 2010.

Jalonen believes SVR is one of the few violent right-wing extremist organisations in Finland. The Ministry of the Interior, similarly, considers the organisation dangerous, although small. “Other right-wing extremist, but non-violent, activity does occur. The webzine Sarastus, for example, may be regarded as a cultural fascist publication,” Jalonen says.