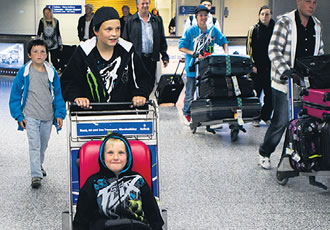 Helsinki-Vantaa Airport, which opened for the Olympic Games of 1952, will be connected to Helsinki’s city centre by rail in the next two years.

“ORGANISED.” “A nine on a scale of four to ten.” “The lack of a train connection with the city centre is a minus.” “Speaks many languages.”

These are but some of the passenger comments that describe Helsinki-Vantaa Airport, which recently turned sixty years old. On the eve of the airport’s sixtieth birthday, the majority of passengers gave it favourable reviews.

“It is organised. We were just in Germany, and at the airport all the signs were in German. You can’t even get service in English at all their desks,” says passenger Petri Rintala, on his way to Amsterdam.

Air travel is now a part of everyday life for many, but people also remember their first visit to Helsinki-Vantaa. Tero Pänttönen, waiting for a flight to Oslo, says that as a little boy, the old parquet floor stuck in his mind. Jaana Tuomisalo from Tampere remembers the excitement of her first visit. “It was the year 1982, and we were travelling to Italy. The airport was significantly smaller then. It was exciting, I had never been on a plane before.”