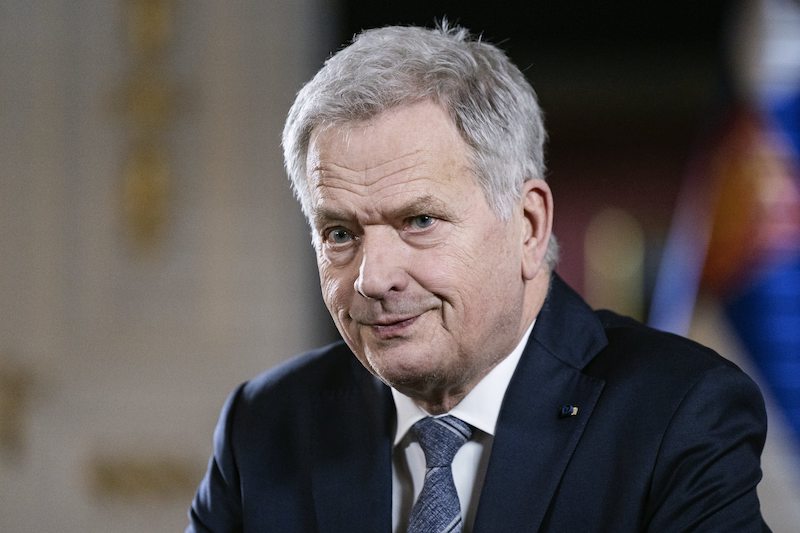 We are now living a time filled with worries. We had already – decade after decade – become accustomed to things always getting better. Or at least to constantly having more and more of everything. Us Finns, we ended up becoming the happiest nation in the world. Without us even really noticing it ourselves.

The past year suddenly took us back to the past. To something that, generation by generation, we had begun to consider increasingly distant, and almost impossible in its irrationality. The horrors of a major war returned to Europe.

Many troubles with a direct impact on our daily lives make our burden of worries even harder to bear. Electricity prices have multiplied. Both the cost of living and interest rates are on the rise. Furthermore, the pandemic has not left us fully in peace yet.

However, when looking back in history, we should also remember all the things we have successfully pulled through together in the past. We have overcome our own wars, a major energy crisis and periods of recession. After trials even harder than those we are facing today, we have always built something better than we had before. We will certainly get through this as well.

I would like to point out, however, that coping is not measured in averages. It is imperative to ensure that also those in the most vulnerable position can cope. This is where the helping hands of fellow people step in.

The Russian acts of war in Ukraine have been condemned on the international political stage on many occasions. Deservedly so. Finland has systematically and determinedly done the same.

If Russia believed that a massive threat would rapidly force Ukraine on its knees, it made a serious error of judgement. One cannot avoid thinking about the similarities the situation has with our Winter War when the Soviet Union assumed that they would march into Helsinki within two weeks. As leaders of a country under authoritarian rule, Stalin and Putin failed to recognise a key factor. The fact that people living in a free country have their own will and convictions. And that a nation that works together constitutes an immense force.

Another error of judgement was to believe that the European or Western compassion for the Ukrainian people would pass. Quite the opposite happened. Instead of only feeling empathy, we are deeply living through this with the Ukrainians. We have embraced the matter of the Ukrainians as our own. And the support for Ukraine only grows stronger.

However, merely stating that erroneous assessments have been made does not give an answer to the key question. How is it possible that the geographical border cutting through Europe is in fact a border between two totally different world views? On this side of that border, it is impossible to even think that a nation could ever imagine starting a war against another. On the Russian side of the border, things are different.

The difference is fundamental, eventually boiling down to the respect of humanity and human life. In recent years, there have been demands for a European security order – sometimes requiring that we preserve the old one, sometimes that we create a new one. Proposals for a need for security guarantees have been made. But for as long as that fundamental difference in the world view persists, it is difficult to find any credible and lasting solutions to these issues.

The outlook is grim. But a just peace is such an important objective that any genuine attempts to reach it are worth advocating. So, too, are Ukraine's efforts to have their initiative processed by the UN.

The past year forces us to think how all this could happen. Not only in world events but, first and foremost, in our own way of thinking. How did we come to believe that it is impossible for something to happen, that then actually happened?

Since, in reality, it has been going on all the time. There have been wars in the Middle East, Africa, but also in Europe: on the Balkans, in Georgia – and even in Ukraine for almost nine years. There has been plenty of cruelty around the world. Perhaps we – in Finland, the Nordic Countries, Europe, and the West in general – have just wanted to lull ourselves into thinking that cruelty will not reach us.

By no means does it mean that we should stop thinking about the good, and to stop bringing the good things forward. But we must also understand that there is evil in the world. The good alone is not sufficient to silence the evil. Facing evil requires determination and firmness. But in our deeds we must never succumb to evil ourselves.

When it comes to preparing oneself against external threats, Finland may, after all, have less things to correct or apologise for than many others. Our readiness and our capabilities are, at least in proportion to our size, among the best in Europe. This work will continue.

However, it is high time to wake up to internal security as well. Finland is an open and tolerant country. In this kind of thinking we may have gone further than other Nordic countries, maybe even further than the whole world. That entails a lot of good things. But being the most tolerant of all also has its pitfalls. Namely, evil is good at finding the one that is the most lenient of all. In the Nordic countries, the direction is now towards strengthening public order and the safety of individuals.

The Finnish foreign and security policy is facing a historical turn. What we could only anticipate a year ago became reality in the spring. We applied for accession to NATO after a rapid but thorough process.

The Russian demands for a sphere of interest and then the invasion of Ukraine. They surely touched every Finn. It generated a spirit and a conviction: we cannot continue along our traditional path any further. The strong popular opinion was reflected both on the co-operation between the President of the Republic and the Government, and on the decisions made by Parliament and the parties.

Our decision was broadly anchored in the Finnish society. This ensured that it would hold not only through the floods of emotion felt at the beginning of the war but also across electoral periods. Major changes must stand the test of time.

Now we are in a situation where we still lack the ratification of two countries. It is possible that the delay will extend beyond the parliamentary elections this spring. This possibility was already referred to in the discussions last spring. It is, naturally, in the hands of the Parliament in office whether they want to decide on the proposal on accession to NATO on our part already before the elections.

In any case, we have reason to believe that our accession will become reality in the course of this year. That will end the era of Finnish military non-alignment.

Even in the future, Finland will bear the main responsibility for defending its own territory. But that will happen as part of a military alliance. Others provide security for us; we provide security for others. Our membership will also strengthen the deterrence of NATO as a whole. At the same time, the threshold of threatening Finland with the use of force will become even higher than before.

This is a major change in how we safeguard our security. However, there is continuity in our foreign policy: Finland has a stable and established line of policy as a member of the EU and as one of the Nordic countries. The rest of the world knows Finland as a competent and trustworthy country which acts in a predictable manner. This kind of reputation is worth holding on to in the future as well.

The international situation is currently exceptionally tense. And this happens at the specific moment when we would need global co-operation to solve the common challenges of the humankind. We must mitigate climate change and adapt to its impacts. We must stop biodiversity loss.

Fortunately, there is hope. Just before Christmas, we got to hear the most encouraging news of the past year from Montreal, as the Biodiversity Conference agreed to stop biodiversity loss by 2030. Even though the goal is extremely ambitious, this is the only possible direction to take. The rate at which we proceed is also decisive. We are running out of time.

It is also encouraging to see that the Finnish industry is adopting the role of a catalyst in the green transition. New doors and international opportunities will open up for first movers. The current energy crisis is an opportunity to speed up the transfer to zero-carbon energy sources. At the same time, the measures contribute to improvements in our own security and security of supply.

Those great challenges of our time – the war, the economic scarcity, climate change – inevitably take our minds to what is actually necessary or important. And that does not concern material things only.

Every day now, we are faced with news that show how unpredictable life can be. There are natural disasters that may impact a whole nation. Or inconceivable individual acts that deeply shake the surrounding community.
All of this silences us to consider and emphasize the value of life. And to seek things that make us and those around us feel good. Even quite mundane matters may suffice, such as bearing one's responsibilities, lending a helping hand to someone, or just encountering one's fellow people with respect.

I remember once having heard a saying that “people are quite remarkable creatures”. I believe this is true. When the going gets tough, all of us find new skills and qualities in ourselves. This is all about our “sisu”, the combination of willpower and perseverance.
Let us have trust in that, and let us trust each other. That is how we have overcome difficulties in the past, too. That provides the foundation for a Finland that trusts in itself.

I wish you all a happy New Year and God’s blessing.